I haven't gotten to the point, yet, when I can call Hong Kong "home," but the feeling of it sometimes wells up, mostly because my mom has been here with me for the past three weeks.  She's been doing a bit of business while here so has had her own agenda, but it's been nice spending time together after work and together for weekend trips.

One of my younger coworkers, about to head to uni, asked me whether it's been weird living with a parent again.  My first thought was, "I guess I'm old enough now that it doesn't bother me."  What I meant was, I've gotten to a point when my mom is more my friend than an overbearing authority figure.  (Which...still sometimes happens, but less often.)  We have similar tastes and both enjoy quality food, discovering interesting places, and looking at old stuff like ruins and traditional housing.  Our tastes diverge elsewhere (i.e. I don't mind trekking around decrepit places and walking as exploration, while my mom prefers observing luxury and taking cabs), but it's just a different style of traveling and I take it as it is.

Since she's leaving tomorrow, she's had this urgency to let me experience some of her favorites around Hong Kong.  Yesterday after a tasty dinner at Shanghai Garden with family friends (which I found out later has 1 Michelin star...HK is turning me high class), we went up to the Peak to see the city at night.  The Peak, the tallest mountain on Hong Kong Island, is extremely touristy, but I have to admit that the views from above were pretty spectacular despite the hoards of Korean and Beijingers swarming about.  Too bad my camera isn't up to par, especially with low-to-no lighting, but here's an attempt at capturing the expansive scene: 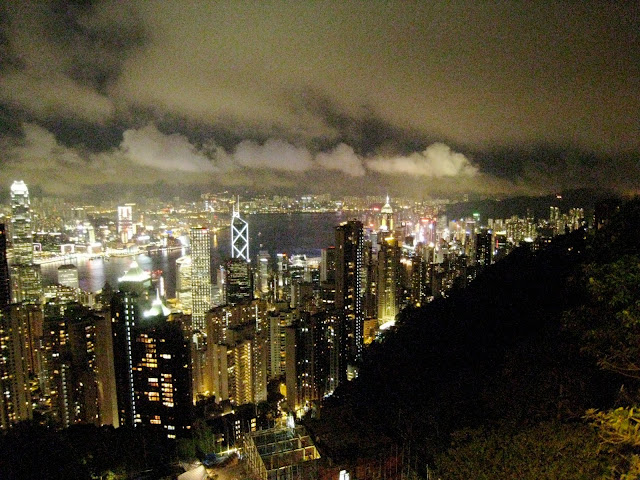 Tonight we grabbed a table at another crowded venue, Tsui Wah restaurant right off of Lan Kwai Fung in Central.  Her favorite s their well known condensed milk buns, generously toasted and slathered with butter.  Even at 10:30pm, the 2 story restaurant - self proclaimed "cafe" but too boisterous to be a real one - was full of locals and the occasional foreign partier.  Fish ball noodle soup rounded off our "ngai yew zhu tsai bao." 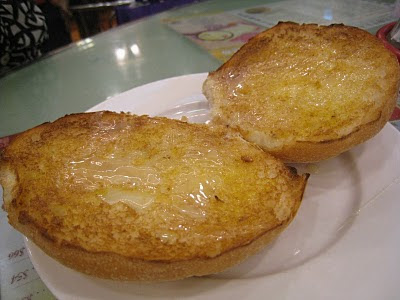 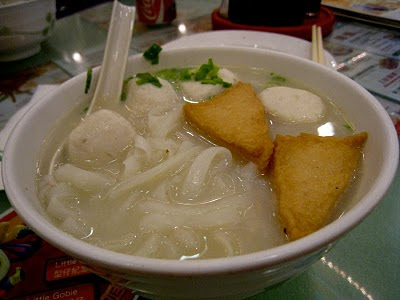 Tomorrow morning I send my mom off to the airport... and there goes my taste of home until I find it for real in the growing familiarity of this island.
Posted by eLG @ 13:06