[HK 9] : MIT and a Chungking eat-through 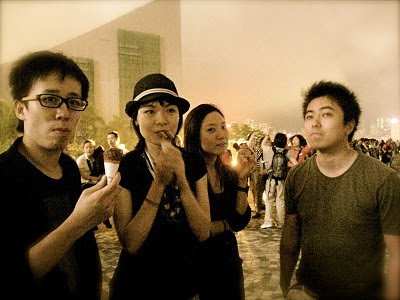 I saw M+O+K again, along with a friend, when another MIT-er landed in our midst for a brief visit.  It's not an attractive picture, but we were enjoying Mister Softee soft serve ice cream while waiting for the evening light show to start.  The ice cream is a lot creamier than what you'd find in the States, making it a tasty pre-dinner treat. 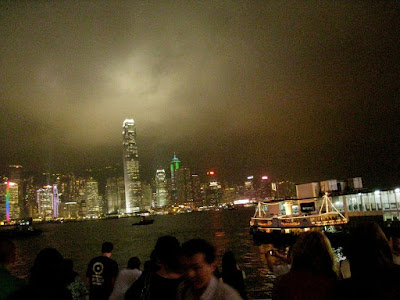 Every night at 8pm, there's a laser light show at the pier.  Every major building along the Harbour lights up and flashes to the tune of the cheesiest music I've heard in a long time.  I kept wondering...who did they possibly pay to compose this?  (Maybe I'll upload a video next time, to give the full effect.)  It was fun to see nonetheless.  The Bank of China building (I.M. Pei) did the most "work" in terms of flashy lighting effects.  It also kept the best time w/ the music. 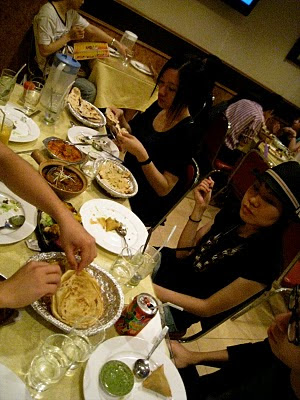 Sam and George would be proud : Indian food in HK!
For dinner, we had Indian food at Khyber Pass - Mess Club Original Curry King, which is a 2 room hole in the wall on the 7th floor of Chungking Mansions in Tsim Sha Tsui, Kowloon.  It's a bit too low brow for my parents, but I found it fascinating and reminiscent of my mental image of the Kowloon Walled City, although it's not as decrepit and crime ridden.  It's noted for the cheapest hostels in HK (I think there are 7 or 8 of them), along with many Indian restaurants (including Khyber Pass) tucked away inside this conglomerate of closely-stitched building blocks.

via Jason Barbacovi
We didn't walk around much, but I'd like to explore more.  This is the one place in Hong Kong where I immediately noticed that non-Chinese immigrants are the majority.  Most of the people were Indian or African, and it's noted that up to 120 nationalities are enclosed w/in its walls.