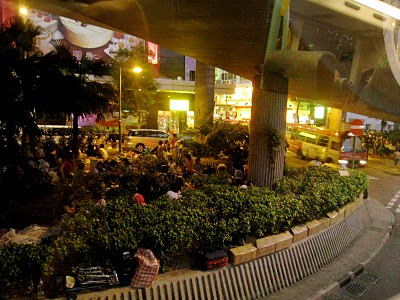 Foreign domestic helpers picnic under Canal Road on a warm Sunday, their day off.
I knew that there was a class difference in Hong Kong, but today it became crystal clear on a trip my mom and I took to the nearby laundry place.  Some critical facts: Because my mom's back has been hurting, I was carrying our huge bag of dirty clothes.  I also had gotten pretty tan while in Shanghai last weekend (despite holding an umbrella and putting on sunblock... can't be helped).  I was wearing shorts and a T-shirt as post-work wear.

We walked in just as the owner is about to close shop, but she was still willing to let us hand over our load.  She made small talk as she weighed the bags of clothes (since laundry is priced by the pound).  Although I did understand some of it, I frankly wasn't paying close attention but noticed when my mom started mentioning my job and my studies in architecture.  The woman paused, then commented about my intelligence in a fawning tone.

Strange interaction?  It probably seems somewhat ordinary.  I realized later, though, that the part I didn't understand was when the woman asked my mom if I were working for her.  ...  Meaning, she thought I was a Filipino maid and was going with my boss to wash the family's clothes.  My mom's comments were her way to tell her that I was the one going places, not this woman and her claims.

So...say what?  I know this is only one person's point of view, but these sorts of snap judgments based on appearance seem to happen more often in HK than anywhere else I've visited.  Several times already, I've heard that I should be aware of how I dress because of how others might perceive me.  I typically don't care what people think in this sense, but this weird incident makes me stop and consider issues of class in HK society.

Foreign domestic helpers make up 5% of the population here in HK, and even though they often come from several countries, more than half are from the Philippines.  After conducting some brief online searching, I found that this influx of Filipinos began in the 70s as a solution to unemployment back at home.  I have many HK friends and even relatives who have employed Filipino women as their children's caretakers, and although this had seemed normal to me, lately I've noticed the odd dynamic created, especially in public space.  A recent DUSP alum did her thesis on this topic, but you don't need to do extensive research to notice that park spaces and public squares are filled with Tagalog chatter, especially on Sundays - the universal day off.  Statue Square in Central, near the MTR stop and close to many banking skyscrapers, is especially filled with people picnicking.  This is their one time to take over the city, and they do it well.

Is this an "us vs. them" situation?  Integration is a funny thing in HK - although many would consider it a diverse and cosmopolitan city, I've sensed a strong divide between locals and outsiders.  Even I am an outsider with my meager Cantonese speaking skills, and because I can't speak as quickly or fluently as many, it's easy to be categorized as childish, too Westernized, or servile.

I can't make any real conclusions from this situation right now save to say that my eyes are daily being opened to the complications of my summer 2010 city.  Have others noticed similar things or other unspoken societal aspects?