Instead of one short day in the Emerald City, we had a one short day in 10+ of the 246 countries represented at the World Expo.  Visiting the Expo felt much like trekking around Disney World or Busch Gardens, with the gawking tourists and mix of the good, the bad, and the really ugly (architecture).  It's one of those experiences that you anticipate as a once-in-a-lifetime moment, although upon getting there it simultaneously fulfills and fails your expectations.  Lesson : every place needs some grace.

Mavis, Otto, and I flew from HK to meet with Huang and Yushiro.  It was an abbreviated visit, but at least, one day at the Expo seemed to be enough time to get a feel for the place and taste some pavilions.

The lines for the very popular pavilions like Britain, Germany, Italy, and Saudi Arabia were too long, though, so we went for some of the lesser known ones.  We were fortunate enough to get to Denmark's (designed by BIG) before the crowds piled up. 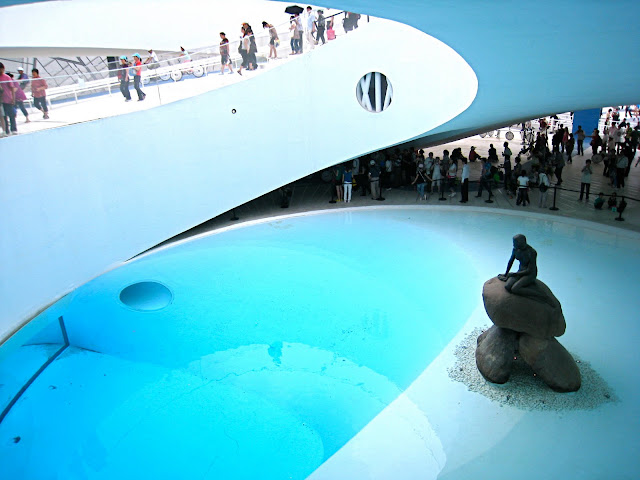 They moved poor Little Mermaid all the way from Copenhagen to Shanghai, just so she could gaze longingly at the tourists, who had legs she could never permanently have.  Alas.
The Denmark pavilion's draw was its unique spiral shape and the fact that you could borrow bicycles and ride around the building.  The detailing and construction quality, though, left much to be desired.

We realizedthat there are 2 ways to judge an Expo pavilion : architecturally and content-wise.  Some were well designed and looked great from the outside, but had nothing within.  Others weren't so flashy looking, but had much content so visitors could actually familiarize themselves with the country, which is what I think the goal of the Expo should be.  (Qatar was like this.)  Still, others managed a good balance of both (like Vietnam and Morocco), while some fell flat (or remained banal boxes) and didn't manage to achieve either.  Denmark's design trumped the content, but the government did cull some (unintentionally) amusing quotes from citizens who were asked to describe the positives of their country: 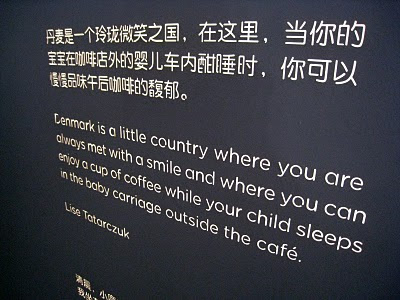 And who would scoff at this?
The smaller pavilions that were quality (and thankfully had short lines) were Vietnam, Qatar, and Morocco.  Vietnam's construction seemed somewhat traditional, since it used bamboo, but was well done and used the material for the entire structure and not simply as cladding, which is what many other pavilions did.  I wish my photos of it had come out better, but here's an example of the arching columns meeting beams, meeting ceiling: 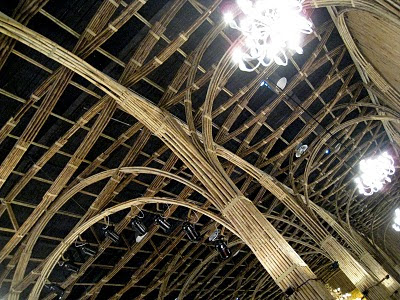 Otto has better photos that showed the cool light fixtures as well.
The size was just right as well.  Many pavilions were hugely out of scale and felt daunting or mildly ridiculous, like the Chinese one : 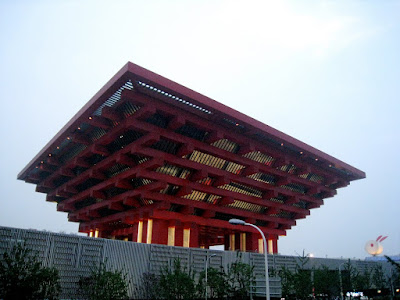 We kept saying, "So big!  Everything is so big!"  The bunny next to it is part of Macao's ...  Why, I don't know.
It did, though, create a modern reinvention of a traditional building typology.  We didn't go inside, though, since the wait was too long.  We deemed any queue over 2 hours to be out of our range, and sadly enough, most pavilions were over this threshold.  Britain's Seed Cathedral (below, designed by Thomas Heatherwick) would have been cool to experience, but was a 4 hour wait.  Saudi Arabia, with its "floating" roof garden, was a whopping 8 hours.  ?!  So suffice to say, exterior photos it was. 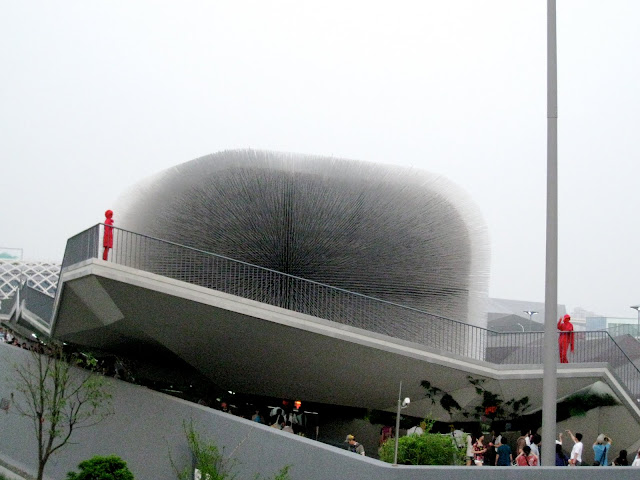 The red people are part of the exhibition.  They waved at us.
Some of the best expo designs were those that people could explore both inside and out.  In that way, you could either choose to wait and walk within to see the exhibition and the interior, or just walk outside and discover a courtyard or semi-enclosed area still with a sense of the building's space.  In that way, we didn't have to endure long lines in order to experience ones like Canada (below) or Mexico: 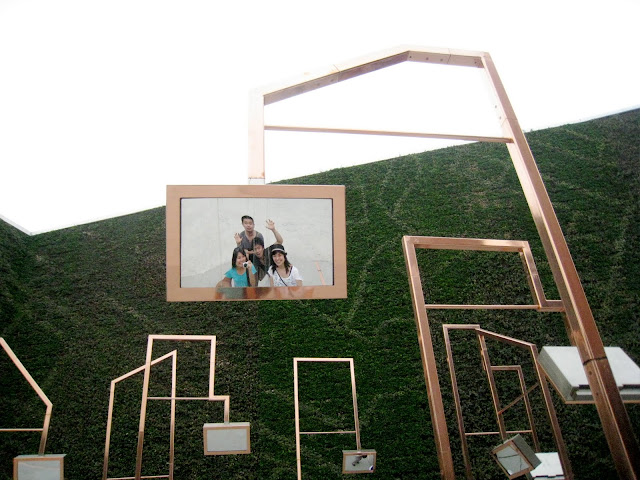 Canada's pavilion featured an exterior "living wall" and fun hanging mirrors.
More photos to be posted in Picasa [ link to be updated ].

All in all, I'm glad for a glimpse of the Expo, although one day was enough for me.  Too many crowds, long lines, and asphalt, along with visions of future waste once the majority of the pavilions are torn down.  One regret was not being able to see much of Shanghai itself.  This was my 2nd time there, but both trips were extremely short and had that feeling of missing the larger picture of the city.  I still don't have a clear sense of the place, but at least we had an excellent host in Huang and ate really delicious foods, like our dinner at Jardin de Jade (need to double check the name): deliciously juicy marinated fish, soup dumplings, and other savory dishes: 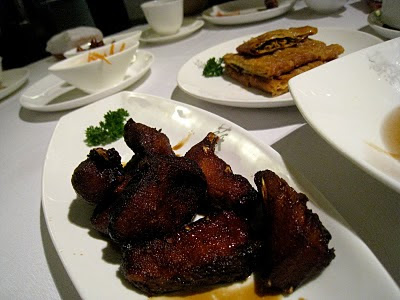 The multi-course meal ended up costing about $10 per person... say what?
We also walked briefly through some of the alleys between traditional lilong housing.  The European scale spoke to the city's colonial past ... extremely intriguing, yet I know so little about it.  I'll have to read more about it later and revisit.

That's the general recap.  This week I'm working on a renovation/addition project for a historic hotel in Beijing.  Wednesday we have a public holiday for the Dragon Festival, and then on Saturday my mom and I, along with a family friend, will head over to China again to visit my mom's childhood village in Toisan.  I've also been sort of pensive lately...  been realizing a lot about my pride and searching for my real purpose for being in HK for the summer.  More later after sleeping.