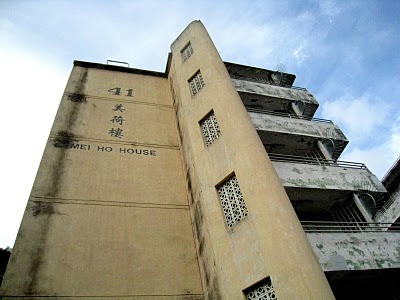 Mei Ho House, Block 41 of the Shek Kip Mei estate development
For the Theory of City Form class I took with Julian Beinart in the Spring, I, along with many of my classmates, still have to write a research paper to complete the class.  My original topic was to analyze Tokyo's spontaneous urban development post WW II in comparison with the DIY nature of slums, in hopes of extracting some principle ways for slum redevelopment.  But now that I'm in Hong Kong for the summer and might not be able to make it over to Japan before heading back home, I've been looking in the local area for the possibility of recrafting my topic and making this my research ground.

It's actually been pretty interesting, discussing the subject with my mom and brainstorming places that might be good to investigate.  Today we went to Shek Kip Mei in the northern part of Kowloon, where there used to be a host of shacks until a fire in 1953 destroyed many of them.  The government then built its first public housing here, but demolished much of it in 2006 as part of their Urban Renewal plans.  This unit, though, will be preserved as a historic building, to be converted into a youth hostel. 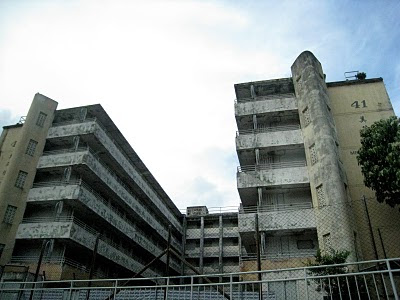 The residents were evicted and the building fenced off, although the rehabilitation has yet to occur.
There are quite a few apartment complexes (here, called estates) that were built in the 50s and 60s and now are in pretty squalid conditions, although improvements have occurred over the years.  (I think of Chungking Mansions.)  The HK government, though, has been on the move with its renewal program, either tearing down or renovating these blocks to make way for new public housing.  The Kowloon Walled City was one of these demolition instances, although it was never rebuilt but paved over with a classical park.  I might look into the conditions in HK that create this sort of urban ghetto environment, and gauge the government's action to remedy it.  I've read citations that laud HK for being one of the top 5 most efficient governments in slum eradication.  Does this mean the poverty line has been raised?  Is it actually a good approach?

I found this sign in the area at a nearby construction site (over a demolished part of the Estates) and was amused : 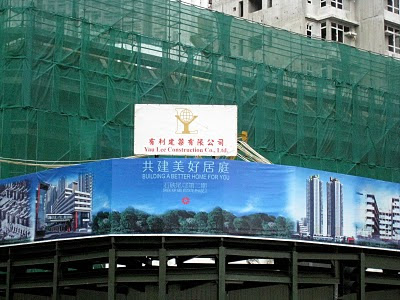