Certain songs have been popping up repeatedly in various contexts lately, and they each are speaking directly to where I am now. Music has a way of doing that - little glimpses that clue into His immense faithfulness.

This one in particular has come up, both as a tangential video viewed and during UCO praise night:

...along with others in the current playlist:
"Beautiful Things" - Gungor
"Gratitude" - Nicole Nordeman
"You're Beautiful" - Phil Wickham
"Revelation Song" - Gateway Worship
So even though I spilled coffee over myself on the bus, have a crick in my neck from sleeping fitfully on an early train, and am still unsure as to how these next few days will pan out... Still, I'm thankfully wearing brown (and not white, which was my alternative) and feel that yes, God's good. And the support of praying friends, kind words, and a non-so-morning friend willing to see the sunrise to drive me to the train station, are all testaments to faithfulness.
Posted by eLG @ 12:47 No comments:

Still on the mind 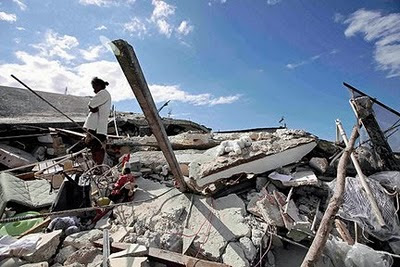 via the UN / Associated Press


It was over 3 months ago, but the rebuilding continues. I was reminded this weekend to keep praying - not simply for my role within all the scattered efforts, which is such a small piece, but for

the people.
The country.
Healing.
Uplifting.
God's work to be done in Port-au-Prince.

It was written for a different context, but the Irish band Bluetree's song, "God of This City" (later covered by Chris Tomlin - check this out for the story behind its penning) seems very relevant, especially the line:

What exactly they are, I'm not sure - but I'm trusting in the One who has all things in the palm of His hand.

For more info about a potential project in Haiti, log into the MIT Global Challenge site and look up Rubble Rousers, formerly Foundations for Haiti. (And vote if you feel compelled!) More on that soon...
Posted by eLG @ 01:48 No comments:

What awesome weather on Monday for the Boston Marathon 2010! This is the first time I've gone out to see it, despite having a good friend run it last year (sorry, Bri). When I heard from Steph that she was going to see Zak run (both friends from our undergrad Christian Fellowship, InterVarsity), I figured I needed to seize the moment before it slipped through the fingers of busyness once again.

And what a sight it was! I might try to upload some of the video clips I took, since it was not only the sight of runners streaming by in front of me, but also the boisterous crowds lining the streets cheering and ringing noise makers. Just the atmosphere itself was electric with excitement, littered with "Go Bill!" or "Get 'em, Minnie Mouse!" (yes, some of the runners wore costumes). It was just amazing to see so many Bostonians out and encouraging one another.

So I figured that seeing Zak (#2344) would be a total crap shoot, but I tried for it anyways - and succeeded! Win! 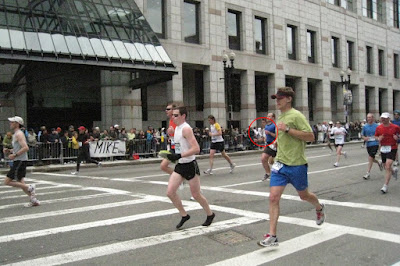 Yes, he is in the red circle in the photo. After evaluating my photos afterwards, I thought, "oh...fail," but really, it was just cool to see someone I knew run by and be able to cheer super loudly for him personally. I actually wasn't close enough to the fence to see down the street, so I had asked a tall guy next to me to let me know if he saw a runner in bright orange shorts coming. I should have given him a tip for being a great informant.

Afterward, navigating the crowd was pure insanity. Every sidewalk was crammed full of people trying to move in both directions at once, and just crossing the street took several detours around blocked streets. I did get to walk past the finish line and see the runners, who before then were giving their all towards the finish line, walking at a s...l...o...w pace. 26.2 miles really wears on your body big time, so I didn't blame them. There were tables of Gatorade, water, and these heat shields as part of the wind down procession: 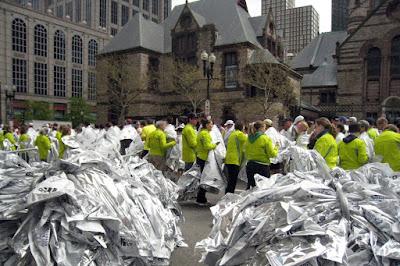 Eventually I made it to the family meet up area under "R" and found these people: 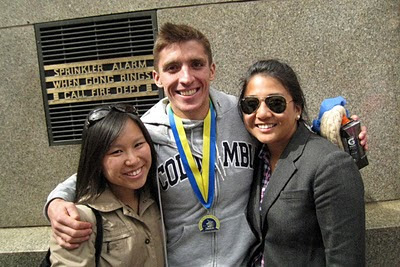 He ran a good race, even with a cold and blistered feet. Big respect and Columbia pride :)

Am I inspired to follow in his footsteps and run a marathon myself? Well....give me many years to warm up to that idea.
Posted by eLG @ 01:56 No comments:

As a typeface lover and one who agonizes over what font will make my presentation boards/portfolio/poster look the best, this is a hilarious way to make decisions. (Click the graphic to view a larger version.) I followed some of the flowchart and just laughed at what I came across, like:

"Do people find you boring from time to time?" >> Times

"Are you alone?" "Follow me..." >> Comic Sans [one that I really can't stand]
There were also some paths and ultimate typeface choices that surprised me as well. Maybe I have a thing or two to learn after all, or maybe this chart just exposes how subjective font choice really can be.
Posted by eLG @ 17:36 2 comments:

Email ThisBlogThis!Share to TwitterShare to FacebookShare to Pinterest
Tags: design

Putting on my best smile 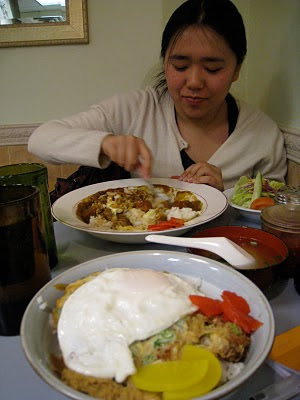 Diana was my lunch partner and a good sport for coming out to Porter Square with me. But who can resist chicken katsu curry (hers), pork katsu don (mine), and interviews with strangers?

My second visit to Porter for spontaneous interviews for this documentary was fruitful, although still nerve-wracking. I don't typically have a problem talking to people. I also typically don't have issues with talking to strangers, either - but within planned settings (i.e. networking sessions) or for casual inquiry (i.e. "Where's the bathroom?" or "Do you know where the FedEx is?"). But approaching people and asking them if I can point a camera at their faces and ask questions... well, to be honest it's still a definite challenge. So I smile a lot - and I mean, a lot. What can be more disarming than a small Asian girl with a big smile?

I was at least prepared for the various answers and had 3 methods of recording our conversations: camcorder, audio recorder, or good ol' pen and paper. It made for an interesting juggle as I switched from one medium to the others, but in all I got to speak with some veterans of Porter Square Exchange, newcomers, and in between.

Next step (aka my "burning the midnight oil" activity): putting together some sort of a cohesive draft film to show my class later today. Progress awaits...
Posted by eLG @ 01:03 No comments:

Boston's "Japantown" : Care enough to be on camera? 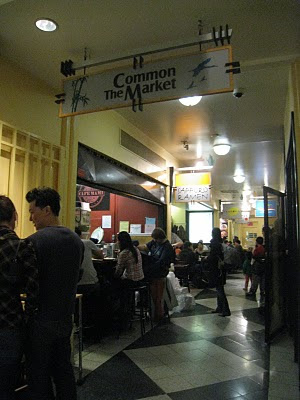 The Common Market, sometimes known as Boston's "Japantown," in Porter Square
So for my Public Art (and Cultural Space) class, I'm making a documentary about the development and current issues of Boston's Japanese community in Porter Square, sometimes called "Japantown" depending on who you talk to. Seeing as I am neither Japanese nor have I ever made a film before, this might seem like a stretch, but I'm interested in ethnic enclaves (for lack of a better term...even though I hate that phrase), issues of globalization/tourism, and how an area is determined to be a Chinatown, Japantown, or ____town ... what is the critical mass? And who decides that, anyways?

Porter Square is particular intriguing to me, not just because I'm such a fan of Japan now (since the idea came up prior to my trip anyways). The Exchange Building there houses roughly 10 Japanese-owned businesses and restaurants - is it a Japantown? How does the definition matter, and who cares?

Now comes the question: do you care? And do you know about film (documentary or otherwise)? If so, definitely get in contact with me, as I'm trying to talk to as many people as possible about the meaning of a Japanese community here in this ole' town. Any advice/ideas are welcome, too.

Email ThisBlogThis!Share to TwitterShare to FacebookShare to Pinterest
Tags: mit, question, to do

Filling out summer job documentation means digging back through the past to see...what did I even do as one of my first jobs? One of the most fun ones I had was working for Inside New York, that ubiquitous guidebook to NYC that every freshman at Columbia (and some other random schools and law firms) gets during orientation. I usually don't reference it anymore, but I made note of it today and happened across the website for the first time in years.

pleasant surprise, the site is looking really good! The guidebook in the past was purely a printed resource, with an inquiries-only, minimal website with no content. Since then (gosh, has it really been 5 years?), the student staff has really hauled out to make an actively-updated website with all the reviews right there, with changing content and a blog.

It's cool how you return to your old roots and see how things have grown.

The bearable lightness of bricks 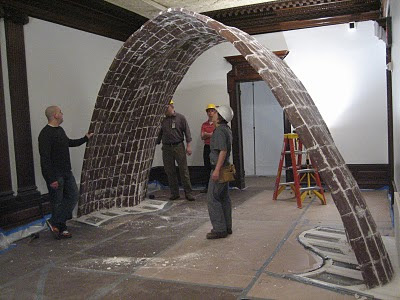 via Mallory
Vault 201 soars! I just got these photos from Mallory, who went down with Lara to decenter (aka remove the formwork) the vault at the Cooper-Hewitt. I couldn't help but cheer when I saw these images - she flies so beautifully! (Yes, I am talking about bricks and mortar.)

It's hard to believe that an entire year ago, we were just conceiving of this project. There were just four of us on the team at that time, and what we had originally designed was perhaps a more modest thing than what was actually built. Throughout the entire process, we zoomed up in scope, had our ambitions crash (literally) to the ground, and then went back to the drawing board several times before this form came through. It's simpler but in some ways, more elegant than before. And, the vault is impeccably clean! 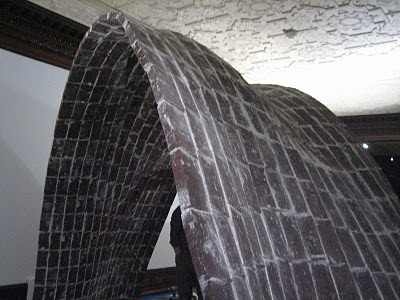 Now the team numbers 7, plus additional members who graciously jumped on the bandwagon for last minute bricklaying over spring break. I look at this and feel just...really proud and happy.

The Design Triennial, "Why Design Now?", opens at the Cooper-Hewitt on May 14. Hopefully some of us will be able to head down for the opening reception, but in any rate, the vault will be there - standing tall - for 8 months. Can't wait!
Posted by eLG @ 22:59 No comments: 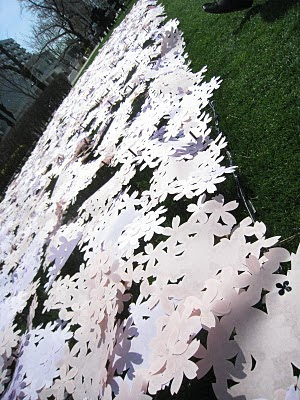 Flowers "blooming" in Roppongi
This has been an utterly gorgeous weekend in Boston, with good timing for Easter today. Gone (hopefully, for good) are the downpour days typical of the area (and of Tane, too). Hello, season of renewal.

Email ThisBlogThis!Share to TwitterShare to FacebookShare to Pinterest
Tags: faith

Music video by La Roux - check it out for crazy hair (giving Justin a run for his money), funky pseudo-architectural floor patterns, and fun beats. (One of my favorite moments is at 1:28.)

To see a better (but unembeddable) version, find it here.
Posted by eLG @ 03:33 No comments:

Why I use "heart" and Japan in the same sentence 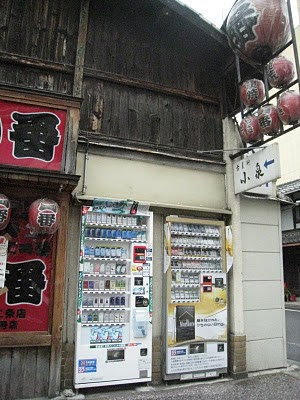 vending machines as facade in Kyoto
I'm not one of those people who uses many emoticons or slangy online chat speech (although I'm a victim of the occasional 'lol' and :D ). But I want to declare that I <3 Japan. Somehow it seems more appropriate given the graphic and often cute nature of things Japanese.

It's been almost a week since coming back to the States. And I miss Japan. My schedule this week could be seen as a trail of Japanese moments:
What does that say? (See the subject of this blog post.)

Some things that remain in mind, in no particular order:
More updates from the trip to come.
Posted by eLG @ 02:15 No comments: