Bookishness / The Bear and the Nightingale by Katherine Arden 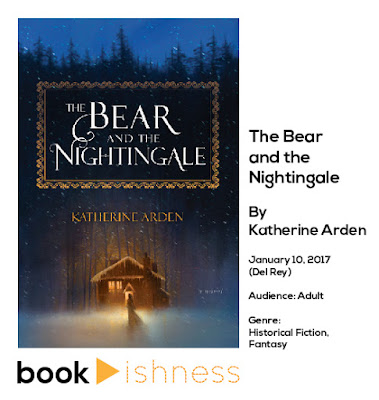 Read _ in bed, with hopes that I would awaken in a clearing of fir trees and snow


I was born in the middle of a snowstorm, so in some ways, the protagonist of The Bear and the Nightingale, Vasilisa, is a kindred spirit. She is also a youngest child with a healthy streak of contrariness – something I can relate to, for better or worse.

But that’s where the similarities end. Vasilisa – or Vasya for short – is a child of the wilderness, the fourth child of a lord in the frigid Russian hinterland. She’s impish, crafty, and gets herself into all kinds of scrapes like a typical kid. But she can also see and communicate with the spirits of the home and natural world, an ability that is both a blessing and a curse. When her stepmother and an attractive young priest campaign to cleanse the village of its demons, Vasya is thrust into the critical role of protecting and restoring the balance.
Read more »
Posted by eLG @ 13:22 No comments: