[K'chea 3] : A happy bday beyond language


27 isn't a particularly notable number when it comes to milestone birthdays, but I have to say that it was probably the most unique celebration in recent memory. When else would you have a chorus of Cambodian primary school students serenade you?  I was somewhat hesitant to share my "one year older" news on the trip, particularly since we'd be heading to our group's new work site and I didn't think turning the focus on myself would be particularly appropriate.

But lo and behold, during our introduction to the Phoem Kok Primary School (the site of our constructed latrine), Savoeun (our contact at Habitat for Humanity) said something in Khmer to the kids and subsequently announced to me that they would be singing on behalf of my birthday.  I was really touched by this gesture, and even though I couldn't understand a word, it was still a great and completely unexpected way to celebrate.

That night after seeing the site, we had our first of many dinners at the local "5 star" restaurant owned by Sinouen, a woman who exuded a kind of strength and defiance both in the kitchen as master chef and in the "dining room" as proprietor.  Putthy (or, affectionately known as Thy Thy) whipped out an English-Khmer birthday song along with a handful of candles, and then we ended the night with a visit to a carnival at the local wat (= temple). 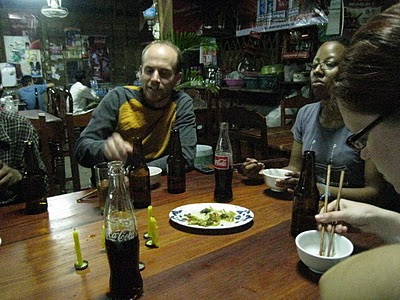 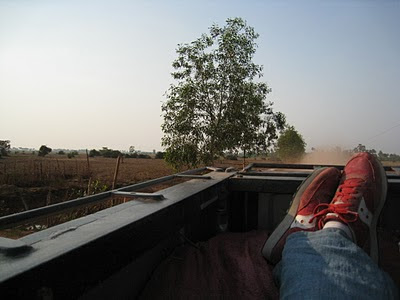 With limited internet access in Cambodia, with one post I said hello, and now with the second I say good-bye to a country filled with smiles, stares (at foreigners, or barang), sampeah (traditional Khmer greeting gesture of respect), and sand - lots of which came back with me to the States and has clogged the washing machine.

I'll have to go backwards and post some memorable moments from the trip, but I realized that 3 weeks is a long time to be both experiencing a new country and away from my own.  It's also long enough to grow attached, and I think many teammates share the same sense of budding love for Cambodia.

Some expectations fulfilled during this time :
Some surprises :
Oh, and the sunsets we witnessed on the way back from the site each day were pretty stunning, this one included : 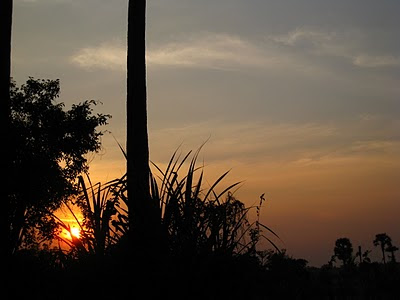 Would I go back?  Most certainly so!  I'm not sure if it could be in the capacity of a tourist, though - more likely as a volunteer, researcher, missionary, or some other capacity that could give back rather than consume.  We'll see what the future holds.  In the meantime, let the reminiscing begin.
Posted by eLG @ 23:48 No comments: 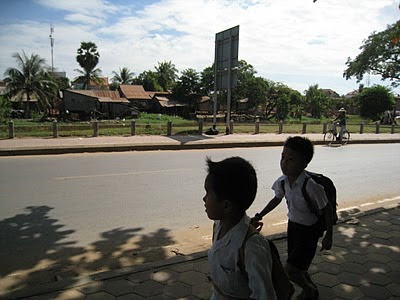 As part of the DLab Schools class I took this past fall, I'm currently in Cambodia for almost 3 weeks, doing field research and trying not to get eaten alive by mosquitoes.  It's been a while since I've talked about anything school related so as a refresher, this class looked at different approaches to improving schools in rural Cambodia (or Kampuchea, in Khmer).  My group has been concentrating on developing sustainable building materials by incorporating readily-available waste materials (here, rice husk ash) into concrete and stabilized soil bricks, with the hope of making school construction cheaper and more locally sourced.

It's actually my 4th day in Siem Reap, the 6th largest city near the heart of the country.  Some people refer to it as an NGO wonderland - there are about 140 here (as roughly estimated by one of our community partners) and it's obvious as you walk down the main drag and pass many an English sign for a health clinic or whatnot.  The city is pretty equipped (parts of it actually remind me of developing towns in China's Pearl River Delta), so I'm spoiled by the fact that I have internet access in our guesthouse, although as of tomorrow that will no longer be true.  My team will head out to one of the areas where Habitat for Humanity operates, est. 40 km away from the city and categorized as "roughin' it," although we'll be staying in a local guesthouse with beds and showers.  Amenities! 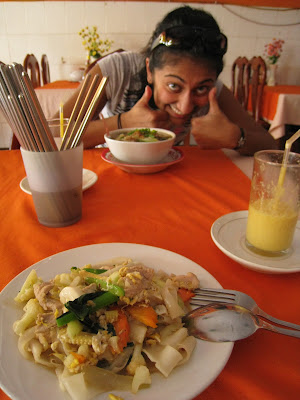 With Saba as my partner in exploration (not crime - too early for that), we've conquered the city and its environs via tuk-tuk, boat, on foot, and most recently by bike.  (Thankfully, we didn't become casualties of reckless student motorbikers.) 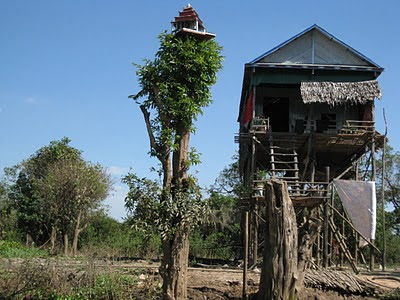 We visited a floating forest and village, gotten bitten by mosquitoes (~14 bites on my left foot and counting), haggled mightily in both day and night markets and managed to pay no more than 50% the asking price, compared fruit smoothies across venues, and generally gotten really dusty and dirty.

My greatest milestone thus far: bargaining in Khmer!  The key phrase to use was "k'lai pon mai(n)" (although...romanization is pretty iffy in general, so this is based on what the vendors were saying), or "how much is this?"  Somehow they didn't expect foreigners to know that, so I got responses in Khmer and managed to keep up the jest that I knew everything they were saying back to me until I got the price I wanted.  Win!  We felt like locals for maybe a couple minutes.  But locals wouldn't shop in touristy markets.  Oh well.