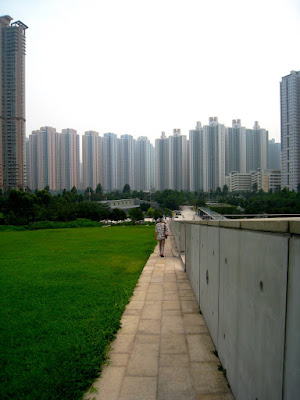 heading back towards the seemingly impenetrable horizon of apartment towers
It's only been a few days, but I find myself perpetually taking photos of the high rise apartment buildings that form a virtual (and very concrete) forest throughout the city.  Within the central area there's variety with these apartments mixed with glassy commercial skyscrapers, but once you start moving outward, the repetition borders on foreboding.  They just keep...marching on and on. 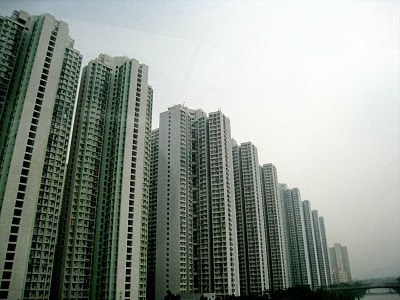 And there comes a point when it's hard to distinguish between those that are privately owned apartments,  richly furnished inside, and those that are actually government-subsidized, low income housing.  Perhaps the apartment type - at least from the outside - is a social equalizer of sorts in this crazy dense city?  It might take some more examination to be able to discern the nuances that maybe my untrained eyes are missing at the moment. 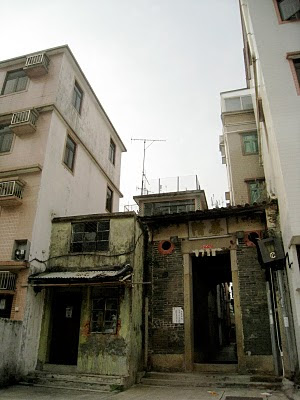 We also visited a wai chun, a type of village-like cluster that are traditional to the Hakka (my dad's people group).  This kind of housing was originally a way for a single family to expand, accommodating all relatives in close proximity.  It's defined by an exterior wall with the houses built along the inside, one after the other as the children grew families of their own.  Stepping inside one of these densely-packed villages-within-a-city was like transitioning into a maze with barely 1 meter wide gaps between: 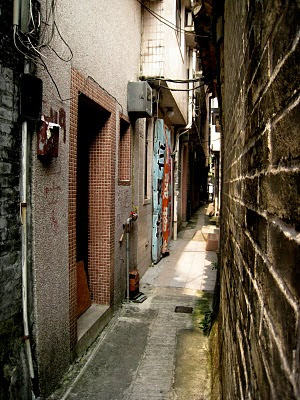 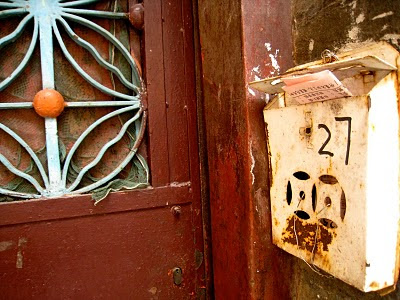 I don't envy the postal worker who has to decipher the mailing addresses.
It was really quite cool to wander around, although I felt self conscious about taking photos.  Something felt voyeuristic or consumer-ish - after all, this is a place where normal people conduct their daily lives.  But document I must: it's in my nature, like taking photos of food.  It was after wandering around here and observing afresh the density of typical HK streets that I then came to understand how something with an even higher density like the Kowloon Walled City could even begin to develop.  I wonder if it might have found roots in this similar tradition of the wai chun?

More on that in another post.  KWC deserves its own entry.