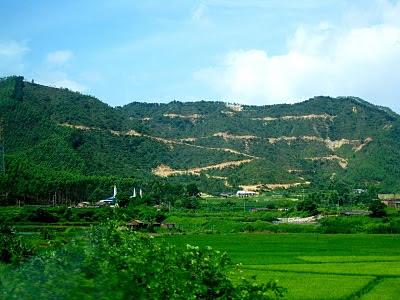 On the way to Toisan, nature meets industrialization
Today my mom and I, along with a family friend, took a day trip to Toisan (台 山, Taishan in Mandarin) to visit her hometown.  My mom was born in a small village in the southern part of the county, but she and my grandmother left when she was 2 years old and she hasn't been back since.

It was a homecoming for her and for me, a window into my family background.  My mom's mom had lived with us while growing up, so I actually spoke Cantonese, English, and Toisanese fluently up until the age of 6.  Although I completely lost my Toisanese speaking skills (and much of my Canto as well), I've been used to hearing its slurpy sound when my mom calls my relatives.  It's closely related to Cantonese, mixed with Vietnamese and other somewhat guttural sounds swirled in. 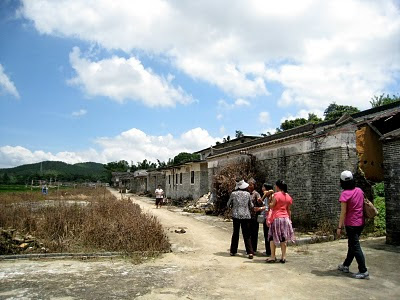 We visited a relative who ends up being my cousin, although she's about my mom's age and her daughter around mine.  The temperature was 90 F but felt like 110 F ... and despite our dripping sweat, we trekked around to see the area in our brief 4 hours there.  Our relatives brought us to my mom's old house, which she remarkably somehow remembers: 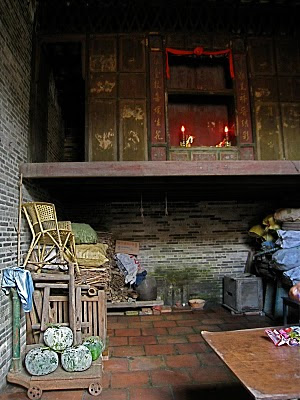 It's about 100 years old with the original wood and clay tiled roof.  Much of it is falling apart now, though, so it's used mostly for storage nowadays.  The top level is actually supposed to be used for storage and is accessible only by ladder, although some houses converted that space into bedrooms. 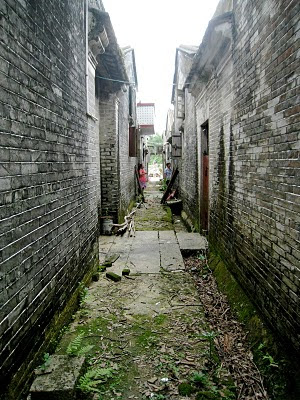 It was amazing to see these older types of houses still standing, others being lived in day to day.  Many others, though, are being torn down and replaced with more modern-looking houses with flat roofs and balconies: 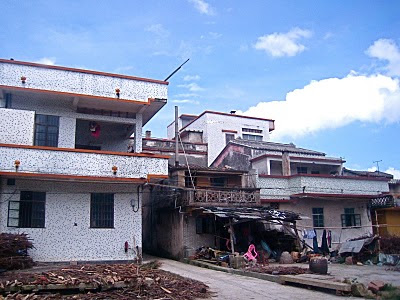 My mom's cousin lives in the more modern house on the left.
A traditional house stands sandwiched between his and its equally modern neighbor.
Here, the collision between tradition and contemporary, brought on by industrialization, is so apparent.  As we were driving, we saw rice paddy fields and fish farms right next to new mid-rise apartment complexes.  This village area is only a 15 minute drive from the nearby downtown area, which is a smaller version of the typical Chinese city.  Highways are being built as we speak, next to fields where water buffalo graze. 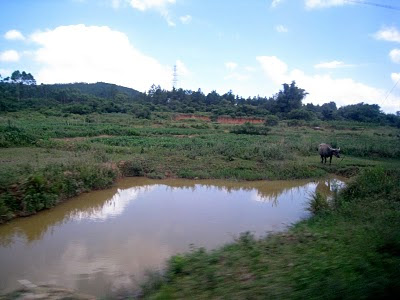 The water in the area varies in shades of brown, tan, and orange, reflecting the color of the dug up soil.
(Cue song : "Everybody's got a water buffalo ...")
The life here stands in such stark contrast with our life back in the States.  My mom and my cousin were talking about fixing up the old house, so I briefly imagined my mom living back here again.  This is where she came from, after all...  but now that she had a childhood in Hong Kong, then went to university, got married, and has worked in the States, could she go back again?