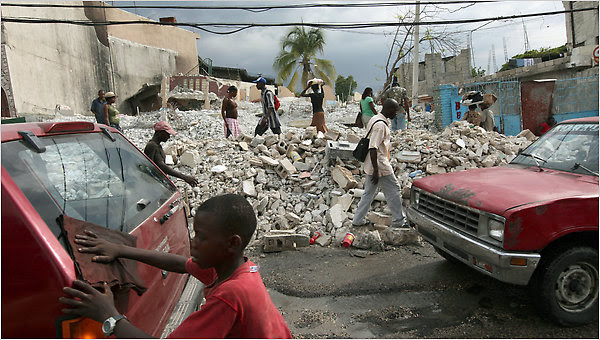 via NYTimes / Photo credit: James Estrin
I just read this article in the NYTimes about the stagnation of Haiti's rebuilding efforts, referenced by this international development blog I just started scanning.  It's sad to read about how so many people's well meaning efforts, with the best intentions (because hey, who starts an NGO with overtly selfish goals?), are actually not meeting the people's needs, or are too fragmented to make a cohesive difference.  Are for-profit businesses the solution?  Regardless of the initiative, I would like to see more Haiti-based organizations (for-profit, non-profit, or whatnot), since hundreds of outside aid agencies are currently doing work in the capital but so few are homegrown.  Maybe this accounts for the people's sense that they are being "occupied" (with unfortunate parallels with war situations like Iraq).  What will happen, then, when they leave?

Although I still am interested in doing further work on the rubble project Diana and I were working on for the IDEAS competition, I'm hoping it can actually be of actual use rather than a student's project being implemented for academic credentials...which sometimes ends up being the unfortunate case for these types of projects.  I'm still not sure how I should move forward with it, but hopefully will get some insight soon.

My cousin David (or "cuz") was recently in Port-au-Prince and Leogane, building temporary housing with the Christian missions organization, Samaritan's Purse.  So even though the city may be NGO-weary, at least there is still good to come from the efforts, even on a small scale for individuals.

Note : Just came across this particular post about local Haitians' skeptical interactions with NGOs, with a reference to a recent This American Life episode.  I agree that NPR has a great way of tackling large issues like foreign aid with bottom-up stories of individual lives.  If I ever go into journalism, I would definitely use them and the deadpan Ira Glass as a model.
Posted by eLG @ 23:44