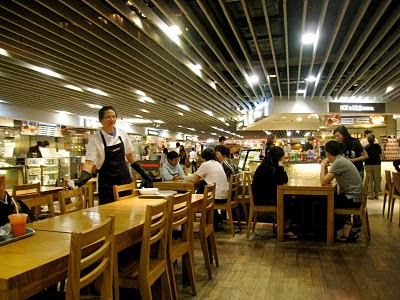 Typical food court, here in the basement of Cityplaza Mall in Tai Koo Shing
What is there to do in HK?  I was talking with Otto (fellow MArch) earlier this morning and asking him what he and Mavis do besides eating and shopping, two of just about the only activities I've ever engaged in every time I've visited.  His response?


Eat.  Shop.  And then Movie.  The occasional Sing.  Drink.  Go out.
Encapsulated in the consumer society.

note: not a direct quote
Hm.  Simple enough - I love the first activity, although the second is a bit harder for me to get into and one I typically avoid while in my home turf.  Today to ease into HK life and culture, my mom and I engaged in the first two national pastimes.  It's hard not to, especially given that we're living on top of a mall.  Malls here are almost always interconnected with the public transit system, making it a virtually seamless experience to go from living space to shopping space to the space of movement from one locale to the next.  It also makes it possible to stay inside with air conditioning, with minimal expose to the typically sweltering heat.

We started the day in a food court, where each different food counter was labeled very simply: Vietnam Cuisine.  Western Cuisine.  Japanese Cuisine.  Noodle Shop.  I found it particularly funny how all Western foods are lumped together, serving mostly burgers and pasta.  It's like "All Look Same" or that "pan-Asian" label in reverse.

Dinner was a fun affair with an old family friend, with the food being good and the conversation even better.  I realize time and time again how nice it is to have old friends who have know you for a while.  It's also nice to be at a point when you talk with your parents' friends in the same manner as your own friends, without that barrier of formality between. 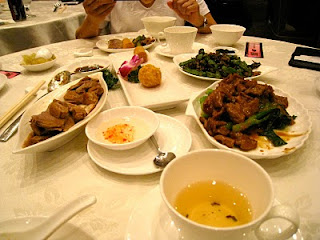 My first meal at a Chiu Chou (or Chaozhou in Mandarin) restaurant - tasty!  I recommend the goose.
I'm not going to document and post every since thing I eat here (lest people become too hungry or jealous... ha), but I started thinking about food consumption and how both necessary and indulgent it is.  Is it too hedonistic to enjoy good food?  Sometimes I grapple with spending so much on new cuisines or restaurants, when I could very well still be healthy yet eat more simply and use that money elsewhere.  I guess this is a similar reason for why I had briefly entertained the idea of becoming a food critic after I had reviewed restaurants for a job a few summers back, but then eventually deemed it not to be a permanent career prospect.  In any rate, something to think further about, especially since this will certainly be a summer with lots of dining out involved.  (Sadly, I only have a microwave in my apartment.  There goes my budget...)  At least it's very possible to eat cheaply here.