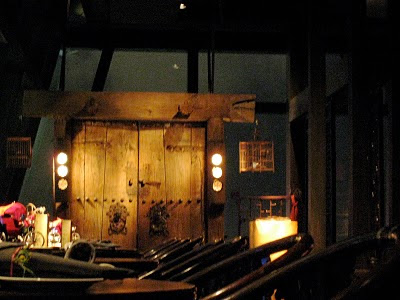 ...and my first Michelin starred meal, which would have been the highlight of yesterday, until Donovan's last minute goal...

Anyways, I was talking with George from MIT over lunch and he mentioned having awesome soft shelled crab at a restaurant at the top of One Peking Road in Tsim Sha Tsui.  When it came up in conversation with my mom after work, she knew immediately which restaurant that was - Hutong - since she had wanted to take me there.  And so then we went, having snagged a 9pm reservation.

Hutong, named after the narrow alleys and gray courtyard housing in Beijing (very cool, by the way, if you get a chance to wander through before they're all torn down by developers), is on the 28th floor and has a sweeping view of Victoria Harbour that in itself makes for a great experience.  It's very much a concept restaurant, part of the Aqua Restaurant group and fashioned to look like Imperial China.  Usually this would be quite cheesy and artificial, but I think they pulled it off well. 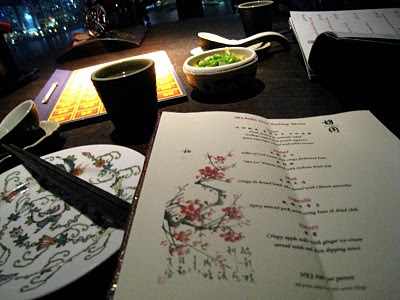 They had a special menu recently redone that was a celebration of the restaurant's receiving a Michelin star for 2010.  I didn't realize before this that the restaurant even had a star - and even one is a pretty big deal in the food world.  And because I can't resist taking pictures of my food...  hence, plenty of documentation.  At first I thought it might be rude or - cough - uncouth, but I saw the waitstaff helping other tables take pictures, so I figured a camera was less than foreign to them.

One note on the waitstaff: they were some of the most gracious hosts and extremely attentive.  If you even attempted to pour your own tea, someone would rush over and do it for you.  They were enthusiastic and polite to the T (or "ah," in Canto), also trying their best to answer non-food inquiries, like how to get from Dong Chung to Tai-O or what music was playing in the background. 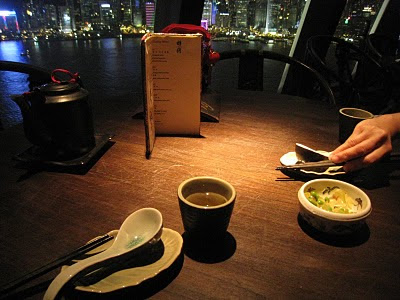 As an amuse-bouche (or maybe just a pre-meal snack, which is common in Chinese restaurants), they had pickled vegetables with edamame.  My mom loves Chinese pickles, so this was one of her favorite parts of the meal actually.  The tea was osmanthus flower, which was quite fragrant and delicious. 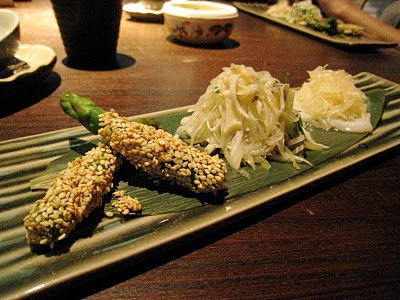 The appetizer was a little trio : asparagus coated with a sweet and spicy sauce (maybe a tangy oyster?  not sure) and sesame; abalone carpaccio with spring onions, shredded raw onion and cilantro (v. good); and sliced scallops with pomelo (related to grapefruit).  So far so good. 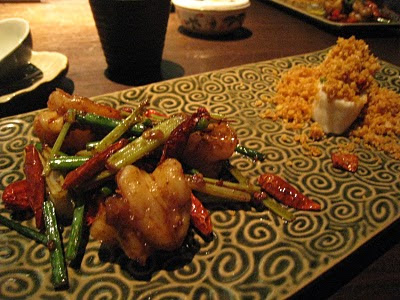 The first course was followed by a second of seafoods : prawns with Sichuan peppers and chilis ("ma" and "la" flavors, respectively), scallions, and celery (v. good); and cod fillet (really tasted like Chilean sea bass) with deep fried fermented beans.  The shrimp was more flavorful and all around a better dish, although the combination of the two together was a nice complement.  I also liked the juxtaposition of the melt-in-your-mouth fish with the crunchy beans, although it was a bit too oily. 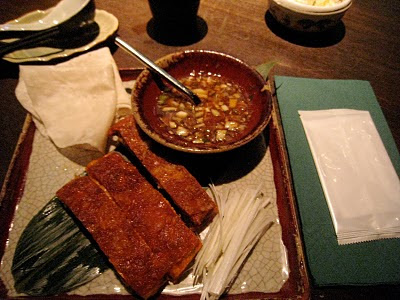 The crispy deboned lamb served Peking duck style with a side of garlic sauce was also v. good, although by this time I was already feeling pretty full.  For the price, it's nice to feel more than full and then be able to pack food away rather than shelling out your wallet and leaving with a stomach still wanting food. 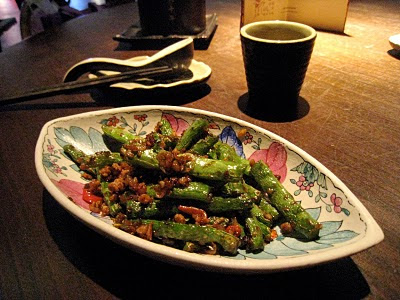 The last dish is listed "vegetable" but is certainly not vegetarian: stir fried green beans with minced pork, dried baby shrimp, and garlic.  This is usually one of my favorite things to eat no matter what restaurant, but sadly - my stomach doesn't have enough capacity to eat more than a few bites.  Tasty, yet a bit oily. 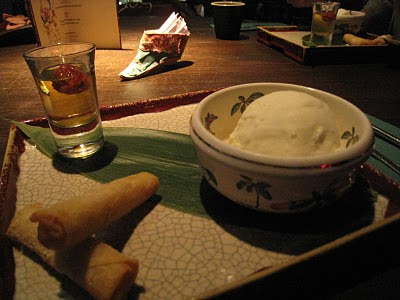 Dessert consisted of apple spring rolls (or "fingers") with date syrup as dipping sauce, and ginger ice cream.  The ice cream was far superior, since it had little fragments of ginger in it and tasted great.  The spring rolls were ok but didn't have that much taste, even when dipped in the syrup.

So was it worth it?  In terms of price, I always think that food could be cheaper, and this was quite a tasty meal but not the best I've had.  In terms of experience, I'm glad we did it, for the food as well as the atmosphere.  It's fun being able to enjoy quality food, but I'm also glad my palate hasn't been so spoiled as to reject the normal burger and fries and simpler fodder.  Quality over price and quantity is my motto.  I also wouldn't be able to rationalize (well, head or heart) eating such expensive meals more than just on special occasions, conscience-wise, but once in a while, an indulgence.