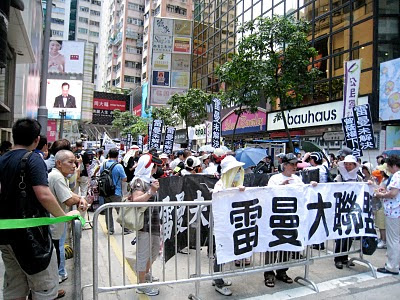 Yesterday we had yet another public holiday (my 2nd in 3 weeks - awesome), this time marking the anniversary of Hong Kong's transfer back to Chinese hands.  One of my friends had mentioned that I might bump into protesters in the Causeway Bay area, but I had forgotten about that until I stepped out of the MTR station there and fell into a chanting crowd, all energetically waving signs and pumping fists into the air.  There was quite a bit of call-and-response yelling, followed by the exuberant banging of drums and what sounded like pots and pans (and those now notorious vuvuzelas).

I wasn't exactly sure what they were protesting, so I later asked one of my coworkers as we were taking a break from studying at the HK Central Library.  (Yes, we were studying.  Yes, I am a nerd.  And yes, I enjoyed it.)  Apparently this has been happening ever since the handover, but this time it was particularly to contest a policy reform bill recently passed by the government that adds seats to the Legislative Council that are sanctioned by the Chinese government.  (This Bloomburg article was informative in getting the basics on the issues.)  One of my other coworkers participated in the demonstration, saying that he was "fighting for freedom."

I guess I take it for granted that as a US citizen, I have a vote that counts.  (And in a swing state like PA, it counts even more.)  Yes, we have an electoral college still, but in other countries, citizens have far less to little impact on their leaders' actions.  I still don't know that much about HK politics, but there seem to be a lot of people who are thirsty for the democracy that the government promises (supposedly by 2020).  Let's hope Beijing keeps its word.

All the marching (and in our case, reading) needs to be fueled somehow, and what better to satiate that hunger than street food? 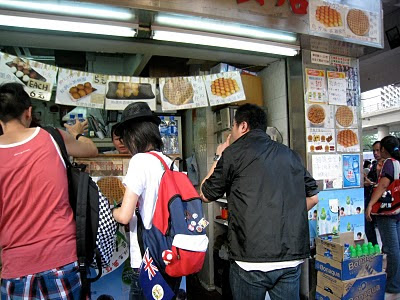 More formal snack nooks ("si sik" = little eats) like this one or street-side carts are everywhere.  This particular one was well situated along Causeway Ave., along the demonstration route and very accessible for quick grabs.  My favorite street food is the egg-based dough literally called little chicken eggs ("giy dan tsai"), which is grilled to order a bit like waffles. 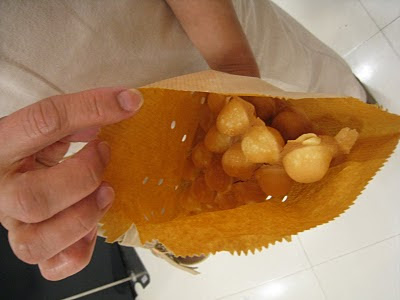 This particular bag wasn't from the street nor from yesterday, but they were still yummy.
But, in the mood for the savory, I got some meatballs with satay sauce: 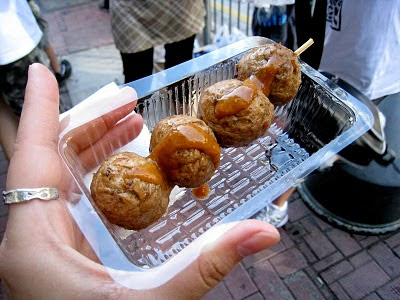 Cathy laughed at me for taking this picture, since she thought I was going to snap one of the demonstration.
The meatballs were only $6 - a bargain!  (In USD, that's about 70 cents I guess.  I don't think you can buy anything in the States for that amount anymore, except for a stamp.)

Lately I've been tired, hence going a couple days without blogging.  Work has been busy and I just moved rooms.  Off to bed...