Lately I've been a bit shoddy with updating, which I guess is inversely correlated with my workload and travel plans.  Usually my brain gets pretty muddled by the end of the day from lack of energy, but thankfully my English hasn't (yet) left me, although sometimes I catch myself imitating my Hong Kong coworkers and friends, which is a bit frightening.  (Hopefully this habit won't stick once I get back...)

Anyways, this past weekend I took a bit of a hiatus from HK and flew to Bangkok to visit my cousin, Jennifer.  It was my first foray into Southeast Asia and quite an eye opening trip, with its fair share of adventure and ups and downs.  I'm very thankful that the cuz is decent w/ her Thai, or else there would have been much more arm waving and charade-like gestures to communicate.  (Well...we were still a bit ridiculous, but to be expected.)

How to summarize my lightning-fast barely-2.5 day trip to the City of Smiles? 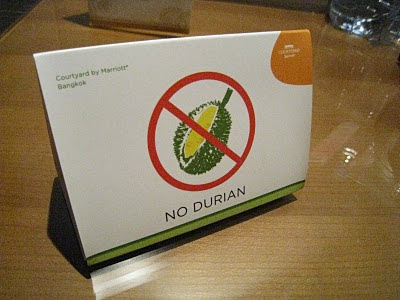 I laughed when I saw this sign in our hotel room, and took this picture especially for the brothers of 10B.  (Well...at least 2 of them I know are fond of this smelly fruit.)  I didn't actually get to eat durian while there, but it's ok - HK also has a lot :)  Some of these rules I can understand, but some others can be challenged : 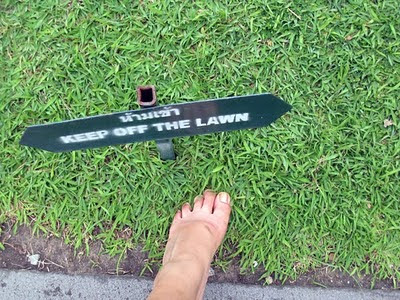 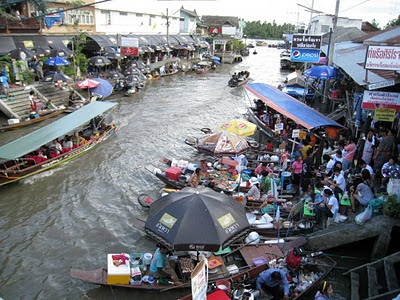 Instead of heading to one of the massive and most-touristed markets like Chaktuchak or Damnoen Sanduak, Cuz and I went to Amphawa Floating Market, a bumpy and cramped 2 hr. van ride out of Bangkok.  Our earlier tuk-tuk driver tried to dissuade us from going, but off we went anyways after a recommendation from friends of ours.  And it was an adventure - first to find out where to catch the bus (after asking around in Thai), the crazy bus ride, and then off to follow the sights (but mostly the smells) towards the klong (= canal).  The place had loads of Thai tourists but very few foreign ones - possibly due to the Buddhist Lent holiday, but maybe also a leftover from slow tourism post-riots.  After walking around and eating yummy foods, we also went on an evening boat trip to see the area's well known fireflies.  (They almost seem fake, the way they blink so rapidly and evenly - but are real!  What a statement.) 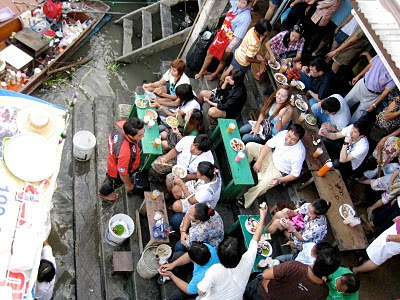 ... at the market and on the street side are great experiences.  At Amphawa, we had front row seats in the canal-side "kitchen stadium" and had first dibs on fresh grilled prawns, spicy papaya salad, thai tea, and other delicious treats.  We also got hit on by the eatery's "maitre'd/head waiter," although we had no intent on gaining a Thai boyfriend. 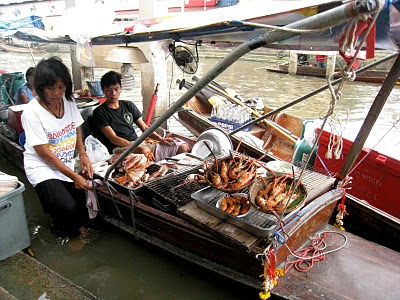 Prawns - so close!  The downside: having the smoke and heat from the grill wafting into our faces, and the not-so-clean canal water sloshing near our feet.  Oh well, can't be too picky about such things. 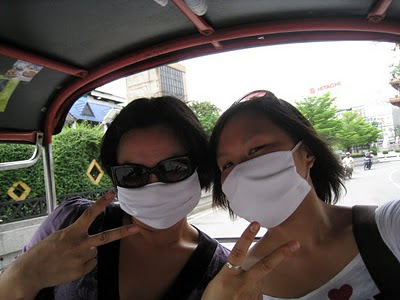 Bangkok takes the cake for having so many different types of public transportation: subway (MRT), skytrain (BTS), taxi, bus, mini bus, river taxi along the klongs, tuk-tuk, motorcycle taxi...  and there are probably even more that I didn't encounter.  We went on 6 of those modes of transport within the weekend, but my favorite was the tuk-tuk: decidedly touristy, but way fun to be zooming around in the open air, flanked within arm's reach of veering motorbikes and street food carts.  Admittedly, the pollution is not so great, but Cuz had the foresight of bringing a mask for each of us.  True fashion statement, no? 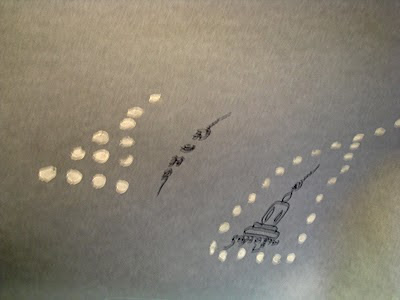 Many a cab and bus had this hand-drawn right above the windshield.  Everywhere you go, there are wats (= Buddhist temples) and mini shrines, almost on every street corner.  Because of the Buddhist holiday, many people also had woven flower bracelets around their wrists.  (Not exactly sure of their meaning.)  I guess I hadn't realized beforehand, but Thailand is quite a religious country.  Children are brought to wats and taught early, like these cuties: 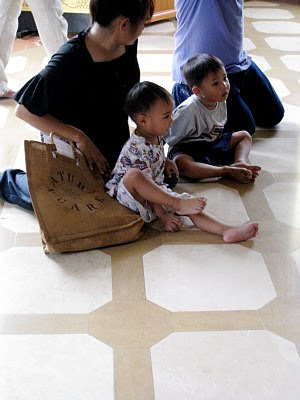 I must admire their widespread faith, which could teach the States a thing or two, although the focus of it remains another question. 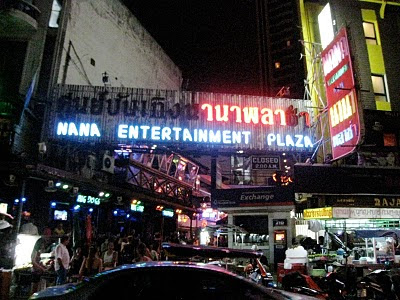 Every country also has its darker side.  I had heard much about the sex trafficking in Bangkok from my cousin and others who have done ministry there, but part of me wanted to see it for myself - not as a hedonistic voyeurist, but out of curiosity and to see what the real needs of the city are.  (This is, after all, the birthplace of the Bluetree song "God of This City.")  Cuz had done outreach in Nana, one of two red light districts in Bangkok, so after wandering around the night market there, we finally came to the "entertainment center."

I'm not going to put up pictures of what it's like inside because frankly...  it was heartbreaking and made me really sad.  And a bit disturbed, especially after noticing that the place - a compound-like enclosed area with 3 stories of bars (more like strip clubs), go-go clubs, and the like - had only young Thai women, white men, and a handful of Thai men as bouncers.  As two Chinese (fully clad) women, I felt extremely conspicuous and occasionally followed, but we just walked around, sat down and chatted a bit about our observations, and then left, feeling the tugging need to pray.  There's more to be said about this encounter, but that will have to wait for a conversation with me in case you're interested.  It was definitely eye-opening, though, and made me even more aware of the need for redemption and Jesus.

I had also wanted to see one of the slum communities around the city, since I've started to do a bit of research into them but have never encountered one myself... but that will have to wait for another trip.