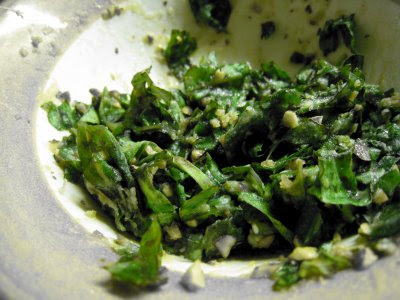 my failed - and tasty - attempt at making pesto
and my attempt to post larger photos.*

so i had an ambition to make pesto for the past week or so, but didn't think not owning either a food processor or mortar/pestle set were at all drawbacks to my scheme.

actually, i was wrong. really, you need either one or the other of those items, or at least a blender. hence, my failed attempt.

i tried to do it anyways. i followed the basic proportions provided in a recipe for arugula pesto by clotilde on her well-known blog, chocolate & zucchini, with some modifications:
but really, chopping all of that up with a cleaver (the chinese cook's blade of choice) and then trying to mash it all together w/ a spoon really doesn't work well. i suppose i could've tried smashing it w/ the flat side of my blade or used a meat tenderizer, but didn't think of those alternatives at the time.

i found, though, that it actually turned out pretty well anyways. once i got over the fact that it was NOT pesto but a sort of chopped basil concoction, i mixed it w/ my couscous and diced tomatoes (w/ a bit of lemon juice) and had a tasty (and quick) dinner. 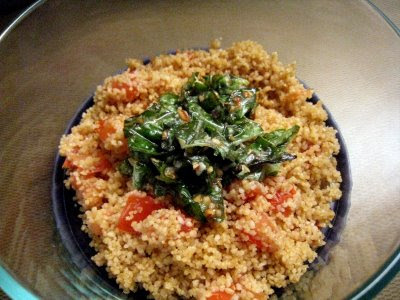 
ah well. i'll get back into the cooking swing of things and make something legitimate soon. until then...failure at least tastes good :]
* i am far from being a real food photographer, but i keep at it anyways. food looks better when it's big.