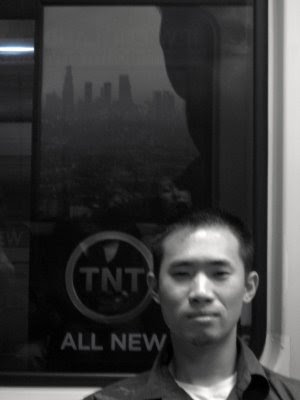 deanna and allen came to visit this past weekend, which was much fun - first visitors in july! they had never been to boston before, so it was good being able to show them around. wandering is the best way to get around the city, although i have to admit that i gave them a "quiz" and needed to give them some hints (although they had some good guesses). 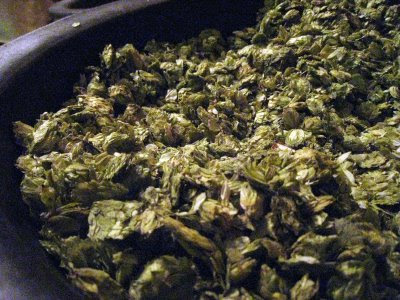 in case you don't know what hops look like...there they are! i actually never knew they were a flower. we went on a tour of the sam adams brewery, which was interesting although the brewery itself was small and the rest of the tour concentrated on beer tasting (a big draw for some others, but early in the morning?? ...). 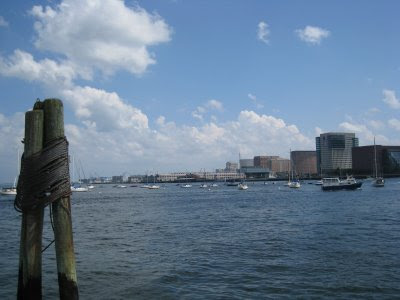 and then headed to the harbor for a ferry ride out to spectacle island... then my camera ran out of batteries, but not before this shot of the water (ica in the distance).

i would highly recommend hopping on a ferry (at the long wharf near quincy market) and just spending the afternoon out on some of the islands in the harbor. it's not too far (within 10-25 mins.), not too expensive ($14 for 2 islands), and is a taste of the sea w/in our grasp.

also met up w/ sung later on for dinner at the barking crab. the decor inside was fun and the place crazy crowded...we anticipated an awesome dinner, but the ~hour wait for our food to come to the table left the experience as underwhelming. the dungeness crab legs were tasty, but i wouldn't recommend the clam chowder unless you want someone else to pop open a can of it for you. (joe's american or even legal seafoods has better.)

but anyways, it's not really the food that makes the visit, but the visitors - yay - and the fun of frolicking in the city together. [note: we actually did frolic, sound of music style. no videos.]
Posted by eLG @ 22:11

Email ThisBlogThis!Share to TwitterShare to FacebookShare to Pinterest
Tags: food, friends, to do, travel