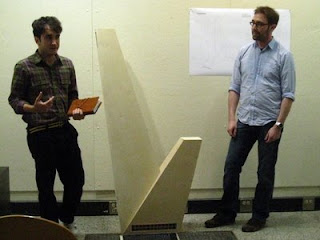 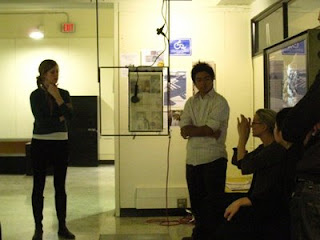 from our first project review (book device): jordan + phil, jennifer + yushiro
project two is officially done! we had our review today with our first guest critics, which meant it was a bit more formal than the last one, but not so terribly intense despite the long hours put in to make the project. the review ran long, though, since all 24 of us had to present and get comments.

a typical architecture review runs in a similar format each time. basically, you prepare and present your work to critics, who will then assess the project and give feedback. hopefully it's constructive criticism, although sometimes it can be intimidating and crits could totally bash your work. the idea is that you're "selling" your concepts and ideas to people who might have never seen your project, using your models and drawings to support your argument for why you made design decisions. i guess that's where presentation skills are key to how you do.

i used to get sort of anxious before review time, but nowadays it's been much easier to talk about my stuff (preparation is key though, esp. when you haven't slept the night before and need to be coherent). it also helps not to take criticism personally - even if the reviewers are harsh, it's the work that they're pinpointing and not the person his/herself. (hard to separate sometimes, though)

anyways, today's review went pretty well, praise God! too exhausted now to post any photos, but i'll play catch up in the next few days.