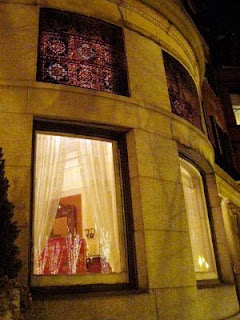 window of opportunity
ash wednesday was a couple days ago, but it could've been any day of the week. instead of being marked by the familiar ash cross on the forehead and quiet reflection, my day was marked by the same old classes and studio time...which felt weird and sort of wrong. sighs. and actually, lent never had a presence in my life outside of brie's coin collecting in high school, and even then it took until college to figure out that the season is much more than just a "catholic thing."

i did actually get to explain it to a friend in bible study, who had never really heard of it before. i guess the idea of giving something up initially sounds legalistic or masochistic/self-depriving, although it means a lot more than that. i understand it as being about getting rid of the excesses of life and refocusing on Jesus, esp. in prep for easter. somehow the ideas of joy and contentment come to mind. but even so, it's hard for me to articulate why this time of the year has become so important to me. maybe it's the necessary pause and reflection in the midst of crazy daily life, the reminder of the reason why i have purpose.

still no idea what i might do for lent, although i have a sense that this'll be a very renewing and growing next 40 days (or, now 38 days). very necessary. i've been tired lately - mostly physically tired - and need some soul refreshment, esp. in this time of pending work craziness.

refreshment's also been found in:
- actually talking w/ people after service instead of just bolting back to studio
- leisurely walks in beacon hill at night
- catch up conversations w/ good friends :)
- going out to dinner on a weekday
- field trips!