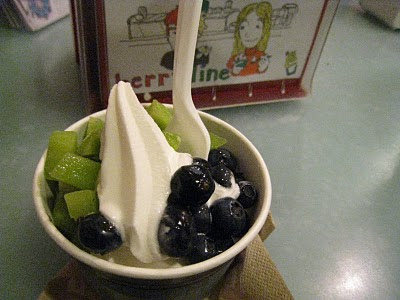 ... captured in a simple cup of Berryline frozen yogurt with kiwi and blueberries. Yum - my first Berryline since last semester! (It's been too long.)

My friends make fun of me for taking more pictures of my food than of them... but the next post will feature actual faces, I promise.

This semester has been a long one, although the quality of the "longness" is different than in the past. This time, I was able to make more choices that greatly influenced how busy I was. Unfortunately, I think I made some wrong ones and took on too many things, leading to a densely packed semester that I wasn't quite prepared to tackle - and really, I don't think I was supposed to, either. 5 classes, 1 job, 2 side projects, 3 leadership roles.... (I shake my head at myself.)

Sure, it's now the end and I'm (just about) done and finished, but not without vast lessons learned - mostly about the great depth of God's grace in managing everything (or rather, realizing that I can't manage without Him) and becoming even more of the supreme multitasker that I am. Oh my reputation...I think I'll have to ruin it one of these days. Step by step I learn, despite my stubbornness.

Anyways, more reflections later. It's getting hot and humid in Boston - must be almost summer! And so many things to do before I leave Cambridge... "miles to go before I sleep," but now I sleep. Blissfully so!
Posted by eLG @ 01:35