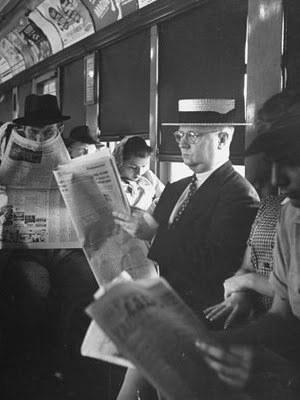 If I had to choose, trains would be my public transport mode of choice for longer journeys. Buses are cheaper and planes are faster, but nowhere else can you sit in moderate comfort and have the benefit of scenic views (even if it's just Jersey) and not have to worry about security or rebooking headaches. On the trek back and forth from Boston to hometown Ambler, I almost always take the train because of its lack of headaches and the flexibility of booking ticket without advanced planning. Sure, the bus (especially Bolt Bus or Megabus) are good alternatives for shorter trips to New York, but once you go further than that, the stopover, traffic, and bad smells usually make the train far worth the extra price tag.

It also pays to talk to strangers.

Over my many many trips along the northeast corridor, I've sat next to a slew of strange and interesting folks. Most of them happened to be middle-aged to older men (not sure why), and have ranged from being silently cordial to interestingly chatty to somewhat sketchy. (Note: beware of men who flirt with wedding rings on their fingers - bad sign all around!) Thankfully, today's conversation was not of this shady kind, but was just simply interesting.

For the first part of the trip I napped and wrote Christmas cards, but eventually the conversation started. It ended up I was sitting next to a retired professor of Japanese literature at Brown, who was still teaching part-time for the love of it. Apparently he has spent about 8 years total in Japan over the course of his research, and having been a grad student in Cambridge, the discussion jumped around from control vs. design freedom in architecture (or, why Stockholm's socialist zoning policies might be a good thing), the best food in Asia, China-Taiwan politics, and Okinawa's place in Japanese policy. It made the train's slow-crawling speed all the more bearable and also gave the added benefit of a speed history lesson on Okinawa* and influences on the people's literature, in the span of an hour or so. I never had known anything about the region, so that was great to learn about and use as a launching pad into other discussions.

I've also discovered, in this conversation and elsewhere, that everyone has an opinion about architecture. Once I mention what kind of grad student I am, people almost always ask, "So what type of architecture do you do?" After explaining how we don't actually learn to design or build any one particular type, the conversations usually open up to everything under the sun. I can appreciate how universal our field is, even if in academia it seems narrow at times.

Anyways, talking with this once-met stranger makes me want to travel more, read more, and do more personal research so I can know more in depth. So...you never know who might be sitting next to you! (Travis and Jen might be able to attest to the fact that this applies to planes as well...)

(* Short twitter-esque cliff notes: Okinawa was previously under its own rule but is now a southern prefecture or province of Japan, made up of a collection of islands and with cultural strains similar to China. It is the site of the Battle of Okinawa in WWII and still has a US military base on its shores.)
Posted by eLG @ 21:25