In the last FAST class, we presented ideas for neuroscience based installations, stemming from a presentation by Professor Pawan Sinha, from the Brain and Cog department, about his research on visual neuroscience, or visualizations of how the brain learns to see and process information.  My summary doesn't do his research justice, so it might be better just to watch his TED talk instead for some very cool demonstrations of his work as applied through his non-profit in India.

In any rate, our group was massive (5 architecture students plus 1 musicology student) and we generated 3 project ideas for last week.  Kelly and I worked on one of them, which was based on the brain's gradual process of deciphering an image from its parts to the whole (particularly at the moment when a blind person regains eyesight and the brain needs to learn to see).  In this, we conceived of a texturized wall with a blank digital surface on top that people could press or rub in order to reveal the image beneath.  At first the textures would be abstract patches, but over time and from a distance, the overall image would be recognized as more people participate.

The original example image, with outlines extracting its principal elements : 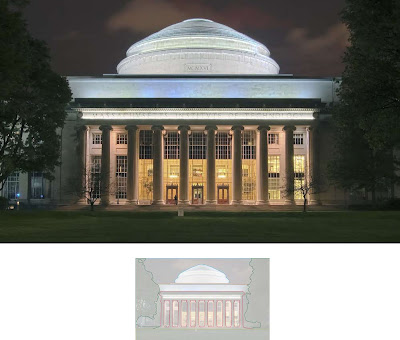 Various texture abstractions of the image, with each combination affecting how one perceives the actual result : 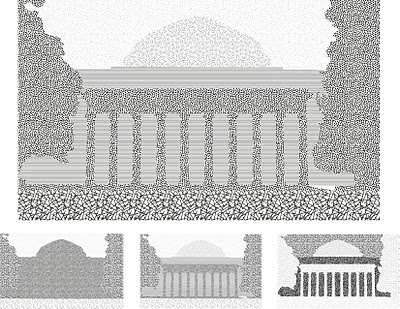 Image of the potential installation wall : 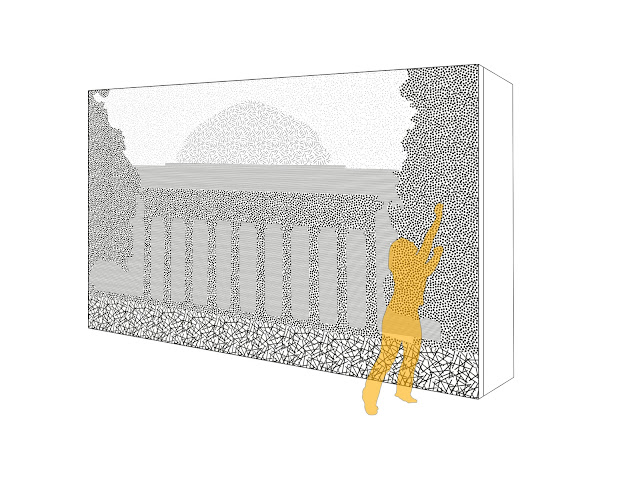 If digitized, the image behind could change and potentially be "layered," like Old Masters paintings that have been concealed by other paintings and can only be revealed by careful stripping.  (Hm...hopefully that reference makes sense.  See the Thomas Crown Affair if not.)  In class, we  discussed potentially having the rate at which someone rubbed the wall affect the image that is revealed underneath, so that a series of images could be revealed at once that would tell a narrative relating to MIT's history or future trajectory.

This is a bit abstract, but of course, I'm procrastinating from my current work by writing this post about my work... and this is still a theoretical project.  By tomorrow, we need to conceive of a final project idea, so we'll see what comes of that.
Posted by eLG @ 20:58