3 years sounds like a long time to spend with one person, but it boggled my mind recently to realize that my brother and sister in law recently celebrated their 3rd year wedding anniversary.  So short and yet so long - now, which one is it? 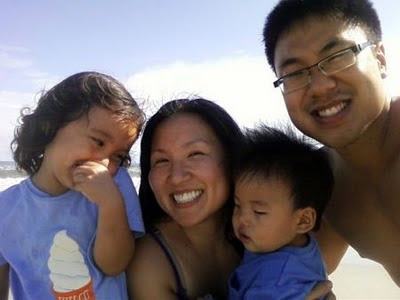 No, they don't have 2 kids: that's Jenny's niece.  All photos snagged from their blog.
In that time, they ...
... moved to England and back, finished the Operation World manuscript, acted in pageants for an all-girls grammar school as one of the few young male teachers, become part of a thriving church community, met our "long lost" cousins in England, devotedly kept up a blog of their adventures, started to spell words in the British manner but not speak in the English way, had Isaac (my nephew), entertained a slew of visiting family and friends (including the Lo fam), visited the States with a barely-3 month old baby in tow, and now are starting another life journey in the Midwest and PhD land... among too many other things to name. 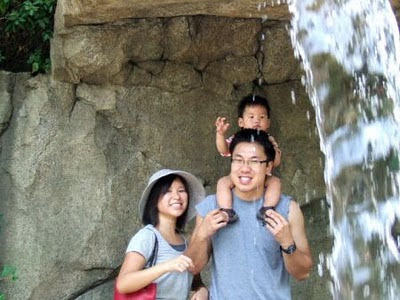 And we went to the zoo, where Isaac exercised his grip of iron on his dad's hair.
I also became a fob for the day.
What else happens in 3 years?

In the measure of my own life, I ...
... finished my first job at an architecture firm, completed 2 years of grad school, pulled the most all nighters in my life, built a couple brick vaults, jetsetted abroad for work/study (and play) purposes (England, El Salvador, Spain, Japan, China, Thailand), was a bridesmaid in 2 weddings, celebrated countless weddings/engagements/babies of friends and family, became part of a thriving grad Christian fellowship, started playing the flute again, honed my "bless you" reputation...  among others.

Is it useful to list such accomplishments?  If to boast, perhaps not, although as a reflection and a reminder to be thankful, likely so.  It also reminds me of how blessed I've been by what God's done in my brother and Jenny's lives.

One thing I've learned from their marriage is the fact that you're not simply becoming the wife/husband for another person, but you're also going to be the sister/brother to that person's siblings, daughter/son to their parents, a friend to their friends, etc.  Scary thought, eh?  (Good thing I like meeting new people...phew.)  I think I've mentioned this before, but I say again that it's been great having the gift of an older sister after my bro married Jenny, and I just hope that I can be as good of a sister to future Mr.'s siblings as well... if/when that becomes a relevant statement.

Until then, my next foreseeable milestone is graduation in a deceptively long but actually short 1.5 years.  What will happen in that time, I'm not sure, but at least there's a sense of great expectancy for both myself and God's work at MIT.
Posted by eLG @ 02:04