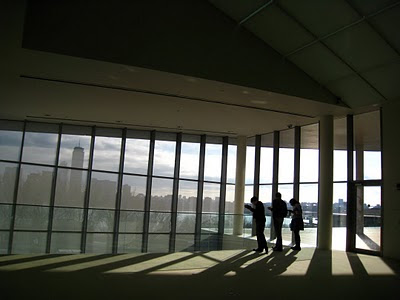 The new Media Lab building, designed by Fumihiko Maki, had its ribbon cutting and dedication ceremony this past Friday. I had a chance to step inside the building at the end of last semester, and the adjective that has stuck in my mind is luminous. It's a building that glows both during the day and at night, due to its material transparency and intensely white walls (and flooring). My friends made fun of me for being a "tourist" (hence the above photo), but hey - it's designed by one of the best Japanese architects, so I don't mind the ridicule.

Maki spoke on Saturday during a symposium about the building's design, and his concept of creating a light-filled "big house, small city" seems to fit nicely with the Media Lab's communally-created innovations. I also found it amusing that he called out the staircases, painted in primary colors, as translations of a structural moment diagram. (Little shout out to John O.)

How the building will adapt to the "world's messiest occupants," the Boston Globe's affectionate term for Media Lab students and researchers, is still yet to be seen. White walls is one thing, while white carpet seems to be...a mistake. This was one of my favorite quotes from their December article:

The Media Lab guys, by contrast, are used to living in a grandma’s attic. Their current quarters are piled high with the dark clutter of new or abandoned experiments, some of them seemingly nutty. Robots peer down at you from shelves. Coils snake around your feet. It’s just as exciting as the Maki but in a completely different way.

Sad that the allusion to "Grandma's attic" probably now applies to the old Media Lab, or E15 (designed by I.M. Pei). If that was an attic, then E14 is a pristine greenhouse or museum - for now.
Posted by eLG @ 15:06