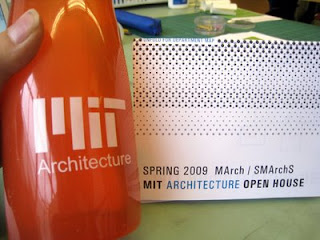 the department now has a water bottle, matching our walls!
this past thursday was the architecture open house for admitted students, which brought fresh faces into our midst. it's quite bizarre to think that, only a year ago, i was in their shoes, asking a million questions and nervously ticking off pro-con lists to figure out which would be the best school.

i hosted a potential level 2 student, and we ended up talking through until the wee hours of the morning. our conversation centered mostly around my answering questions she has about the program, like "where can i learn about scripting and robots?" [answer: media lab]. i noticed, though, that she and many other students seemed most curious about the quality of life and studio culture. "is it competitive?" [answer: no. in fact, we are the antithesis of competitive, although you still have the nosy ones who ask, "are you done your project yet? will you build a physical model?"] sure, there's been some civil unrest due to a serious lack of sleep and a lack of architecture background for some, but all in all, i think we operate like a true community of idiosyncratic individuals. (we also enjoy oxymorons.) 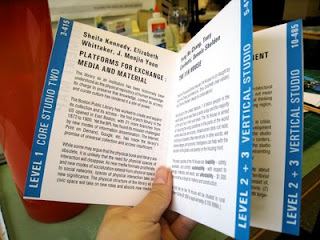 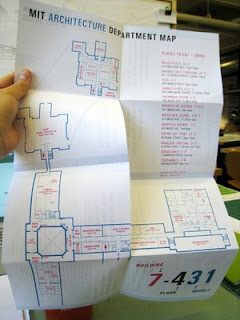 cool studio preview booklet turned map, designed by marissa and a huge improvement on our literature in other years
i'm glad our studio didn't end up having a pin up that day, or else we wouldn't have had time to chat with incoming students. it actually would've been even better if the prospectives had time to just wander around and ask us questions, instead of being shuttled in and out of studio so quickly. hopefully they still got an accurate portrait of the school.

i did manage to meet a diverse set of students, some potential level 1's and 2's and even a few smarchs students. there were 2 columbians who crossed my path, and i hope they end up coming. each year should have at least one representative from cu+bc, methinks.

another perpetual question people had was whether or not there's a rivalry between mit and harvard. the concensus among the student body is a NO. we don't really care. kids at the grad school of design (gsd) are different than mit kids. one of my professors described it as the archetypical apples and oranges comparision. but really, that's just fruit. there are just certain people who find mit to be the right home for them (me included), and others who gravitate towards the gsd. i found myself mentally gauging people, and i did meet some who i thought would like the gsd better, which is fine. everyone should find their right fit in the end.

_ currently feeling : pretty lively and recovered from stomach issues
_ currently doing : programming a library, thinking about writing a paper, thinking about sleep too
_ finished watching : l'auberge espagnole, which makes me want to study abroad, w/ less promiscuity
_wishlist: i would find a summer job, or a job would find me
Posted by eLG @ 17:01