Bookishness / The Girl in the Tower by Katherine Arden 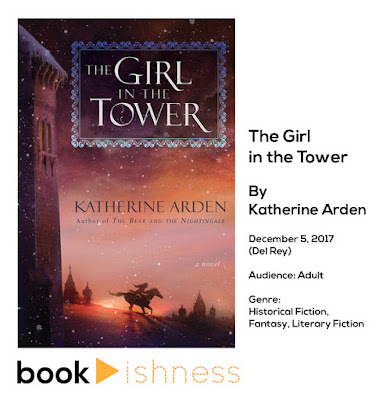 Greetings from a faraway land, a land that has been bereft of books ... until now. I haven't been able to write for a while, for various reasons personal and procrastination-ish, but this book has lingered in the back of my mind. Yes, I had committed to writing this review, but more importantly, I wanted to do it but I didn't get to it in a timely manner. And so I thought, "Maybe I'll reread the book to refresh my memory so I can write a proper review." Then, "I won't read any other books until I write this review."

Then life happened, health happened, and a few months later, nothing happened.

Until I decided to pick up another book and read.

I intentionally chose a book in a different genre, a lighter dose of realistic fiction to get me turning pages but that wouldn't mix too much with my memories of Vasya and medieval Russia. And it worked. I started reading without guilt, and I've now started writing bits and pieces again.

And because I have followed through in writing about a book a read several months ago, you'll know it's good.


Read _ during the remnants of summer -- yet still, I shivered...

I read. Shivered. Went back to reread sections. Savored. But at some point, many months overdue, a review needs to be written.

The Girl in the Tower (Winternight #2) was a very welcome follow up to The Bear and the Nightingale, and, already, I can't wait for Vasya's story to conclude in The Winter of the Witch (forthcoming in January 2019). (Truly, does this series have to stop at 3?)

The story picks up right where BN leaves off, as Vasya, accused as a witch in the aftermath of her showdown with the priest and the Bear, flees her village in the ice-gripped north of medieval Russia and makes her way down to Moscow. Along the way, she reunites with her brother Sasha, now a wiser warrior-monk with his own regrets, her cousin Dmitrii, the Grand Prince of Moscow, and her older sister Olga, who lives a proper noblewoman's life in the capitol. And with this transition from backwater country to chaotic city comes political intrigue, mysterious enemies, disguised identities, ghosts, and magic that threatens all bounds.

I love how this book really expands in so many dimensions. The characters are even more vivid than in the previous book. We see Vasya grow in understanding of the world and her place in it, while still retaining her impudent spark and desire to throw off the fetters of expectation. The main conflict extends beyond church vs. natural spirits to the wider world of politics and statecraft. We even get glimpses of a wider 'Rus, one that is far more dangerous and intriguing than Vasya had imagined in her pinings for adventure.

The relationships are also things of beauty. From the playful interactions between Vasya and her stallion Solevey to the tender moments of siblings united to the growing sparks with a certain frost king, they are interactions with a depth and fierceness. They are loyal to the core, even if these characters can't always be fully honest with one another.

And here, Katherine Arden continues to spirit us away with her lyrical writing, making me shiver at the passing fingers of a ghost.

There is more to be said, but in order not to give too much away, my last words will be: read the book. Read them both. Read the one to come.

See my review of the first book in the Winternight Trilogy, The Bear and the Nightingale.


/////
Publisher / Goodreads / Amazon
Note: I received a free Advanced Reader Copy of The Girl in the Tower from the publisher via NetGalley, in exchange for an honest review.