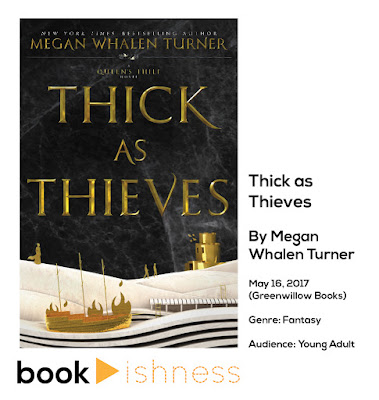 Read _ While planning my next adventurous escape for the summer

A daring escape through desert and mountain,
where nothing is what it seems

Two years ago, the Tall Man and I embarked on a cross-country road trip. With a new car and adventure in mind, we plotted a zigzagging route from Los Angeles to Philadelphia, connecting the dots between friend's houses, meeting relatives, and nature's wonders -- plus the odd man-made creation like the Jolly Green Giant (Blue Earth, Minnesota). Although I had visited various national parks in the past with my family, the sheer diversity in the landscape still wowed me. There was an immensity to our trek, a pilgrimage of sorts through all of America's textures and faces.

Reading Thick as Thieves, the fifth installment of The Queen's Thief series, was a little like this trip. The book focuses primarily on a journey -- a physical one across varied landscapes, but also an emotional one, charting the trajectory of a friendship, of identities, of belonging.

If you're already a fan of The Queen's Thief, this book has long been on your radar (7 years long). If Megan Whalen Turner is new to you, you might be thinking, who? There's a refreshing unflashiness about her. She quietly crafts these exquisite books that challenge what you think about plot, characters, and world building, injecting something new and interesting into the congested and often unoriginal YA sphere. But Turner is an author who quickly became one of my favorites after a friend (hi Livia!) recommended the first book in the series, The Thief, a few years ago.

Anyways, back to the book. Thick as Thieves brings us a new perspective on world of Eugenides and the Queen of Attolia, this time a bottom-up view of the kingdoms in the form of Kamet, a slave escaping the Medes empire with a companion simply referred to as "the Attolian." As is classic Turner, there are twists and turns in the novel, leading up to reveals that shine major retrospective light on the entire book. As a reader, you know you can't take everything at face value along the way, and yet Turner writes so well that this doesn't bother me -- I'm along for the ride and totally committed.

"'Sometimes we mistake these things.'
He laid a hand on my shoulder.
'Be certain before you let go of him.
I once was lost, and my friend came for me.'"

Although other readers seem to have sped through this book, I admittedly took it at a more leisurely pace than with her other books. I meandered as I followed Kamet and the Attolian through salt plains and mountains. They have myriad adventures, their lives are at stake, but if there is one flaw in the book, it's that I wasn't totally sold on the utter urgency of the escape. Even so, I still overall enjoyed Thick as Thieves and ended up rereading the ending a couple times to digest it all.

A final note: I would NOT recommend reading this as a standalone book. There's too much going on in the kingdoms, and this book relies on knowledge revealed in the other books. Do yourself a favor and go first to The Thief, then find yourself running through the rest of the series. You will be grateful and will hopefully find yourself a new favorite author just as I had.

Loyal Turner readers will quickly notice that this cover departs from the previous 4 books, which each featured partial snapshots of bodily gestures and poses. Those books were really centered on characters representing their respective countries of Eddis, Attolia, and Sounis, while this book is not so much about another kingdom and its rulers, but about a voyage undertaken. In that sense, I like how the cover retains some of the regality of the other covers with its striking gold and black, while bringing in a new visual language of collage to better convey the journey.

(And although the rest of the books have been rereleased with new covers in this newer style, I still like the illustrative nature of the old ones better.)

Note: A version of this review appears on Goodreads.