A place to rest one's head - 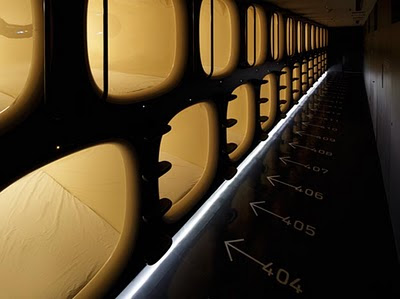 When looking up examples of capsule hotels, which is a Japanese idiosyncrasy and result of ultra optimization of space, I came across this one called Nine Hours - named for the time it takes for you to sleep and get ready.  Although it looks more like a wall of ovens (or worse, a wall of graves) rather than a wall of beds, what caught my eye was actually the list of rules on their website, which are as follows:

9h may refuse the conclusion of the contract in any of the following cases.
Hilarious.... and somewhat disturbing at the same time.  The website says explicitly that the floors and elevators are separated by gender as well.  This makes me wonder what type of person uses these sorts of hotels - not simply business people on the go?  Does the architecture encourage the kinds of behavior of the guests, or the other way around?  Does morality fit into the picture?

In any rate, I don't think this is exactly what Kisho Kurokawa, architect of the Nakagin Capsule Tower, had intended when he built the first of capsule hotels in the 1970s, more under the premise of accommodating change and recyclability within architecture as part of the Metabolist movement.