the joy of retreating (long version) 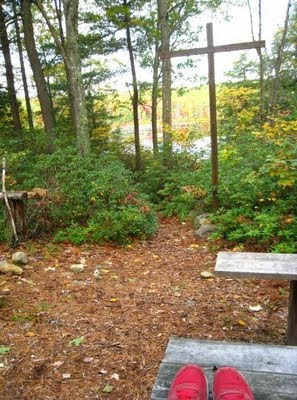 
Last weekend's Boston grad retreat to Toah Nipi in Rindge, New Hampshire, gave me great joy. Although I had been somewhat stressed about taking days off from school so close to a deadline, thankfully my review was pushed back to this Friday, and I had peace knowing it was the right thing to do.

I had some people ask me what you do on a retreat. Essentially, it's a time away from daily life - very often out in a somewhat remote and natural setting - to get refocused on God and spend quality time with other people, mostly Christian although it's not really required that you be one to go. (But of course...meeting God is sort of the point, so there's no deception there :P )

Anyways, the week leading up to the retreat I had this great anticipation of things great to come. I had no idea what I was expected - and even now, there are some things unknown - but I was excited for whatever God had in store. We looked at the book of Jonah, which was short enough (4 chapters) yet chock full enough of insights and information to make it an indepth study. Skits made it come alive (I proudly acted as cargo being thrown out of the ship in v. 1:5 haha), and in all we had a lively discussion about its lessons.

It was also the worship band's public "debut": 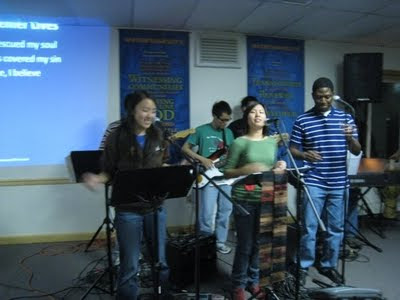 (Thanks to Linda, our photographer!)


which was Source of Specific Joy #1. A friend who saw this photo on Facebook told me, "I didn't know you were in a band!" Well...I guess I am! Although this isn't really the type to give "concerts" per se (although we welcome your commissions ha)... We started playing back at the beginning of the summer, after finding a need for a worship band at GCF. We've truly come a long way since our beginning sessions (when salvation seemed to be long off... inside joke), but Saturday's praise session and then Sunday morning's went so well that we were incredibly thankful - hence, being full of joy. I've realized more and more how much joy the band gives me - leading worship, hearing ~180 voices become one voice, listening to each other play and being united as a band, etc. These are great - and often ridiculously silly - brothers and sisters to be with :] 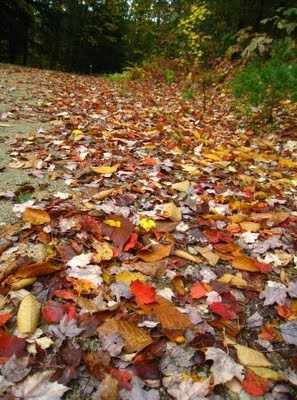 Not just falling leaves, but being among the trees and witnessing how beautiful a New England autumn can be. I was deprived of hiking this past summer, so it was nice to get up early on Sunday morning and just walk around by myself. There's something just so peaceful about being in nature with enough fresh air to clean your lungs and silence around save for the wind in the leaves. (It also makes me somewhat poetic - nice byproduct.)

It was also cool meeting people from other schools and bumping into some old faces I hadn't expected to see there. Good times overall, and I'm hoping the lessons learned will stay with me through the stress of the semester. I still have to sort out some things, though - that sense of anticipation hasn't really left me, so I wonder what's left to come... I guess I'll find out soon enough?
Posted by eLG @ 22:43