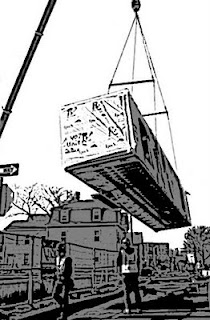 One of my tasks at my internship, among loads of other things, was to take on the job of coordinating and moderating (and eventually trouble-shooting) a Green Development Center webcast. Now...I've given plenty of presentations within an academic context, but not many in the professional world, and a total of zero web-based ones. This was new territory, but it's been a cool experience learning in the last couple months about the process of developing one and just researching and getting educated on the topic itself.

I've heard about off-site (or modular) cnstruction a little bit, but just imagined cranes swinging boxes in the air - very cookie cutter building and not very interesting. However, after chatting quite a bit with the panelists, who are all experts in the field, I soon realized that there was a lot more to it. It means that buildings can still be customized, but instead of constructing it directly in the site ("stick building"), it's fabricated in the controlled environment of a factory and then shipped and placed with a crane. The regulated atmosphere doesn't automate the process necessarily (not a conveyor belt, but still people doing the work), but it makes it faster, often cleaner, and more integrated of a process.

This diagram from some UVA students was helpful in illustrating how off-site construction goes from factory to site: 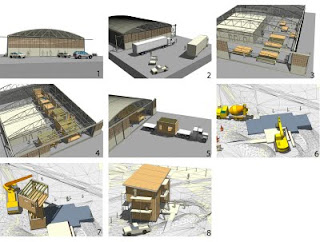 (UVA)
Then...take 2 months' worth of research, conference calls, and ta-da! 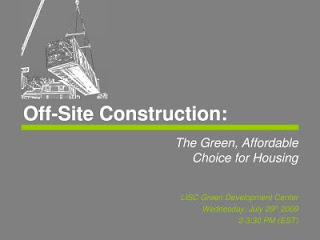 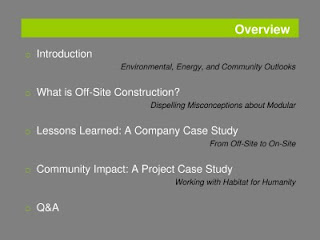 The hour and a half went well yesterday, despite some technical hiccups. Wahoo - that's one big project done.
I won't go into length about off-site construction itself, but some of the things I noticed:
Technology: love it, hate it, can't live without it.
Posted by eLG @ 18:10