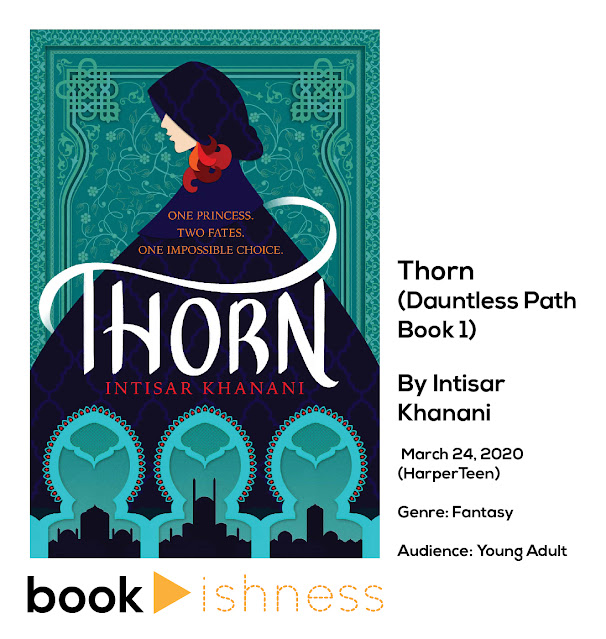 Read _ For the second time, right before starting The Theft of Sunlight (eek!).

A princess finds her voice,
realizing that courage is more than skin deep.

When the stay-at-home orders first clamped down last March, I wasn't able to read or do much of anything. You can probably relate. Even though I'm used to spending a lot of time at home due to remote working and the boundaries of chronic illness, it was still an abrupt halt, couched in a haze of confusion and fear. I felt displaced from my everyday life. Then I was literally displaced from my home when I went to shelter in place with my parents for a few months. It was a sweet time with my mom and dad, for sure, but it was also a hard time -- a time of exile that continues well into 2021, although I am thankfully home and reunited with the Tall Man.

Books eventually became my solace again. I read THORN by Intisar Khanani right before the chaos fully set in. Little did I know how much Alyrra's story of persistence, clawing her way out of darkness towards the light of justice and hope, would mean in those days. It became one of my favorite reads of 2020.

Thorn separates itself from its fairy tale foundation ("The Goose Girl" by the Brothers Grimm) and becomes a far more nuanced story, a mystery surrounded by an undercurrent of magic and masked identities. The start of the novel is leisurely and the writing largely subtle, but once we got (literally) on the road from the tiny kingdom of Adania to its intimidating neighbor, Menaiya, I was hooked. The plot unfolds and unfolds, then takes a drastic turn that I didn't fully expect yet totally enjoyed. I was a bit surprised by the ending, though, finding some of the author's decisions to be out of character and jarring.

Still, the ending (and the book as a whole) makes you ask the perpetual question: what is justice? And who's justice?

Princess Alyrra really resonates with me. She transforms from a timid character with deep fears and a traumatized past to one who trusts her own intuition, cleverly navigating threats with honesty, humility, and strength. Or, maybe it's more accurate to say that she rediscovers these qualities for herself. They were always there, scars and all. Her striving for acceptance and value in the midst of crushing circumstances feels real and nearly never overdone.

As I think more about it, it's really the characters that shine in this novel. While I wish the world of Menaiya had been fleshed out a bit more, it's the relationships that hit my heart: the frightening tension between Alyrra and her nemesis Valka, her and Prince Kestrin's guarded yet intrigued interest, and the tender friendships she makes with Sage and the rest of her adopted Menaiyan family. But my favorite relationships are the ones Alyrra makes with the Wind and the noble Horse Falada -- there I find pure magic and love and delight!

Unfortunately, there are things I can't write about regarding other favorite moments because the secrets revealed are just so good, so disturbing, yet also so spoiler-ish... Alas. So I'll just say, you have to read to discover more about life in Menaiya and the mysteries within. 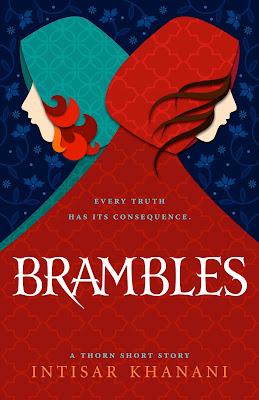 I learned about Intisar when she was still an indie author. I haven't read the original self-published edition of Thorn from 2012, but I'm glad it has a second vibrant life through this expanded and edited version. And while it is technically a standalone novel, if you're thirsty to learn more about Alyrra and her world, you can pick up Brambles, the prequel novelette. It reveals more about the origins of Valka's bitterness and Alyrra's brother's torment, putting in stark relief the life the princess yearns to leave behind in Adania. 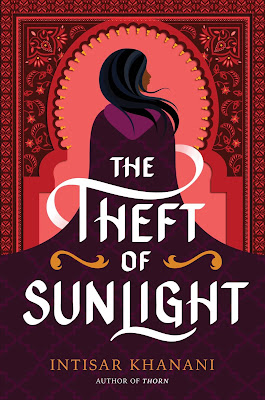 There's also an upcoming duology set in the same world that I can't wait to read. The short story that accompanies Thorn gives us a glimpse of our new main character, the practical and steely Rae. The first book of the duology, The Theft of Sunlight (Dauntless Path Book 2), comes out on March 23, 2021. Be sure to check out the book launch with Intisar and her fellow author Emily B. Martin!

As an aside, I would highly recommend checking out the author's newsletter. It's enjoyably personable, informative. I end up reading every one.

See my abbreviated reviews of Thorn and Brambles on Goodreads.

Out of curiosity, I took a look at one of the old covers for the indie release of Thorn back in 2012 ... and I'll just say that I'm so glad it was redesigned by Jenny Zemanek in 2014 and relicensed for HarperTeen last year. The silhouette of the main character on the cover, abstracted to look like a paper cutting, both shrouds her in mystery and evokes other well-known fairy tale characters like Little Red Riding Hood. The striking color punch against the textured background is effective, suggesting a world that we're just able to glimpse through archways -- one that we may only be able to see in glimpses.

Note: I received an advanced reader copy in exchange for an honest review. Thanks to HarperTeen and Edelweiss for the opportunity -- and especially to Intisar for making it all happen!