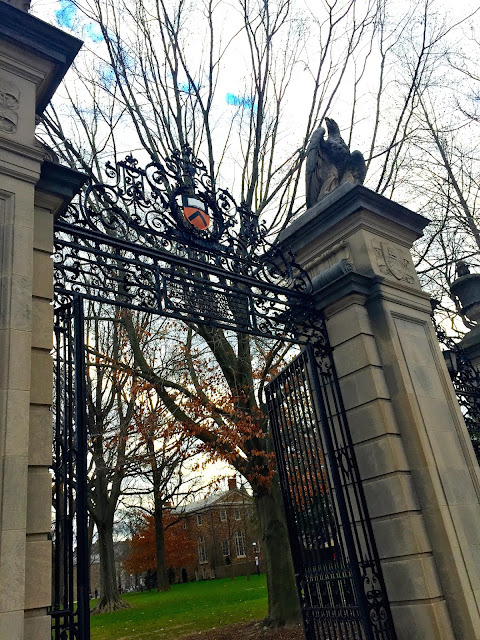 It looks like I'm destined to live in College Town, USA -- at least for the near future. The Tall Man and I traded Cambridge, Massachusetts ("Bostonia") for Princeton, New Jersey ("Princetonia"). It's been ten months so far, and in truth, I'm still getting used to it. I miss Boston. I miss our friends and the quirky campus culture. Princeton feels stuffy and elitist -- even to an Ivy Leaguer who just came from MIT (ironic?). Here, I have to drive a car everywhere here. I mean, I have to own a car! There aren't enough sidewalks to get to my local grocery store!


But it's been ten months, and this place is slowly becoming more familiar. Our apartment still has unpacked boxes, but it smells more like us and has a beautiful view. We're making friends, not just acquaintances. Gosh, it really is nice to have people you feel comfortable texting to meet up! It sounds so minor and trivial, and yet it has taken time.

Ten months is also enough time to start to develop routines and find new favorites. I've discovered I actually like what Jersey has to offer: not just the highways and the non-descript strip malls, but the farms, the architecture, the generous doses of culture.

When I started grad school, I wrote a series of posts under the heading "Becoming Bostonian," my little discoveries of my new city. So here, in a new locale, I begin a new series: "Perusing Princetonia." I must admit I agonized over that verb. Should it have been an adjective? An adverb? What's a good way to describe this exploration? But it took an impromptu moment to bring to mind my choice:


peruse
(v.) formal
1. Read (something), typically in a thorough or careful way
1.1. Examine carefully or at length


The formality and carefulness seem fitting for Princeton. But I hope to inject some cheekiness and spontaneity into my discoveries and this place, too.
Posted by eLG @ 23:03