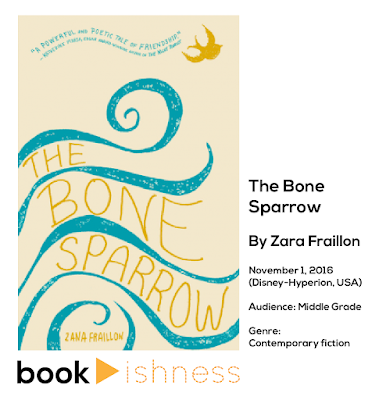 Read _ mostly at night before bed, on Kindle


To say this book is just about a kid growing up in a refugee camp wouldn't do it justice. It wouldn't do justice to Subhi, his family, nor the real families behind this story. Nor would it do justice to the seemingly simple yet lyrical way in which it was written. It's a book that surprises and delights, while not shying away from the harsh realities of our times.


The Bone Sparrow is one of my highlight reads so far this year. While it's technically aimed towards a younger audience, it's a story that we could all benefit from reading. It's pretty timely, too, in the midst of this massive refugee crisis across the globe. It's hard to turn on the radio and not hear about people fleeing places like Syria, Iraq, Afghanistan -- or about the tenuous conditions they live in, in Greece, Turkey, and elsewhere.

But what about the Rohingya of Burma? Yep, I hadn't heard of them either. Fraillon does an admirable job of educating us about the plight of this little-known Muslim people group without being at all pedantic. We learn through the innocent eyes of ten year old "limbo kid" Subhi, also known as DAR-1: the first one born in the detention camp where he and his family await a decision on their immigration status.

I'm getting ahead of myself. This is a book that unwraps itself slowly. Not all the facts are immediately revealed. We don't even know initially where Subhi is, but bit by bit, Fraillon craftily feeds the reader another nugget. The environment begins to flesh out. We find ourselves there in the dusty detention camp with him and his family, feeling the relentless beat of the sun, seeing the barbed wire, sensing the glare of the Jackets (security guards) on our backs.

In the midst of this bleak environment, Jimmie appears, a cheeky glimmer of a girl from the "Outside" who becomes our second narrator. I initially rolled my eyes at yet another MG/YA novel with multiple points of view (especially from opposing boy/girl perspectives) and found the transitions to be a bit clunky. But I started to find Jimmie's story of loss and yearning compelling. And so I read on. As her path and Subhi's intertwine, the pace of the novel suddenly zips along and keeps me glued to the page.

Quite a bit of the story is spent on this layered friendship, but the other relationships really shine as well. I really love reading about Subhi and Eli and their heartfelt -- yet challenged -- trust. Subhi's older sister Queeny and his mother (called Maá) also play a key role in his reality. They ground him and remind him of his father back in the "old country," but they also confuse him with their own struggles with their uncertain status.

Although the story is told from the point of view of two ten year olds, it doesn’t shy away from the realities of camp life. Subhi and Jimmie are naive in their own ways, but the "scales fall from their eyes" as they're pushed to their limits amidst new harsh conditions and situations. There were times when I found my heart racing, found myself both utterly joyful and full of sorrow. There isn't one without the other.

The writing is quite fun to read with these ebbs and flows. It's interwoven with aspects of magical realism that shape the characters and the narrative. Although there are some parts where I feel the author uses just one too many metaphors, I found Subhi's voice to be particularly whimsical. He constructs a magical world around himself, helping him to cope and fill in cracks in his understanding. There's the Night Sea, crashing outside the tent and threatening to sweep him away to another world. Then there's the Shakespeare duck, which crack me up every time. Subhi finds refuge in stories, told to himself and to others.

"I need these stories. Everyone else in here has memories to hold on to. Everyone else has things to think on to stop them getting squashed down to nothing. But I don't have memories of anywhere else,
and all these days just squish into the same."

May we also find refuge in his and Jimmie's story.


The cover is whimsical and child-like, with textures that remind me of both woodblock prints and hand drawings. There's a definite tension present: On the one hand, the title is drowning in the waves of the Night Sea. The situation at the refugee camp is grim, suffocating even. But the sparrow flies aloft towards the sky and freedom. There is a sense of hope conveyed, in an otherwise dark place.

I really enjoy how Fraillon uses the medium of children's/young adult fiction to convey the sense of hardship and the glimmers of hope found in the midst of refugee life. She raises awareness in her readers in a well-written, relatable story without hitting anyone over the head with facts, figures, and sorry images of sad babies. Very much appreciated.

Another book I would recommend that tackles hefty topics in a similar vein is Hold Tight, Don't Let Go by Laura Rose Wagner, a young adult novel that tells the story of two friends in the aftermath of the 2010 Haiti earthquake. Readers might also enjoy The Boy in the Striped Pajamas by John Boyne.

Note: I received a free electronic copy of The Bone Sparrow from the publisher via NetGalley, in exchange for an honest review.

The emphasis in the book quotes above are also my own.
Posted by eLG @ 23:12