Happy Bellies is a Kickstarter project bringing fuzzy version of favorite Indian foods into our arms, while delivering life-saving technologies to rural India.

Here's Part II of my conversation with Diana, one of the creative minds behind the initiative. We get candid about Happy Bellies and get a 'lil bit more personal.


If you missed it, check out Part I here.

We meandered over to Chinatown, since Diana was craving some quality Chinese food. We were pretty stuffed by that time, but couldn’t resist sitting down at Dim Sum Garden (1020 Race St.) ordering xiao long bao and sheng jian bao (steamed and pan-fried Shanghainese dumplings, respectively).

Me: What was your first exposure to Indian food? Or India?

Diana: I don’t remember … Indian food wasn’t something that my family ate regularly. My first actual exposure to the food was probably when I first studied abroad during college. That’s when I understood that there were different types of Indian foods, not just naan and chicken tikka masala. Every region has its own specialty. In South India where I was, they had the masala dosa, the idlis, the vadas, the filtered coffee -- all these very, very special things.

We then started talking about food poisoning, different regional foods, then diverged on a tangent to the documentary “Searching for General Tso.” Discussing the film lead us to comparisons between Indian and Chinese food and… 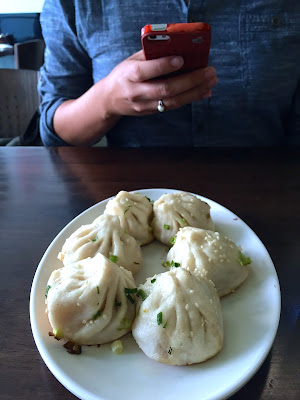 If you were to make Happy Bellies out of Chinese food, what would you make?

That’s hard! You need to help me with that. Chinese food, like a distinct kind of shape… Like a char siu bao. People have already seen those on keychains, right. You can do it out of dimsum: har gaw, siu mai, char siu bao, chicken feet…

[I laugh] I don’t know about chicken feet.

Unless you had a mini wok with smiling vegetables in it or something.

It’s true that some of it’s been done. For instance, I’ve seen dumpling keychains.

I have too. And I mean, they’re really cute and of course [East] Asians would do it first. They like everything cute. I don’t think Indians care about it as much. 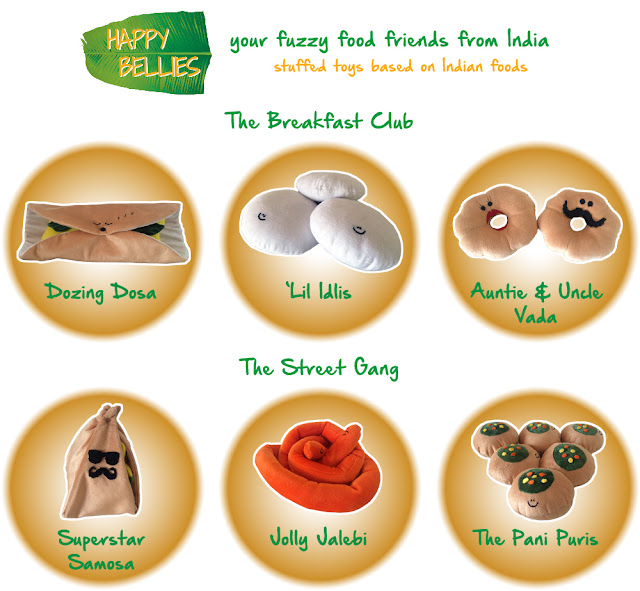 You be the judge: Cute or no? via Happy Bellies

What is considered cute in India?

That’s a good question. I don’t think they have a good sense of that. Or, usually what many people think is cute, I think is tacky. Our soft toy manufacturer thought that nobody would buy our stuff. Hopefully that’s not the case, but we’ll see.

Why did he think that?
Because he thought, why would people buy food? He eats this stuff everyday. And so he said, You need to make it cuter, with big eyes and big features. You could just do that more. And we said no, this is how we wanted to do it. We thought this [way] was cute on a more subtle side.

Ooh yeah, ok. Design in India. Everything’s super flashy and colorful, patterned and not just nice Indian patterns like pretty paisleys and whatnot, but like bling in your face: too much color, too much sparkle. Being subtle is not really a thing.

So if the samosa were covered in sequins, maybe it would appeal more?

Appeal more to the mass Indian market? I don’t think that’s quite the audience.

Then who is the audience?

Maybe non-Indians who like Indian food and appreciate it. Indians abroad who miss this stuff and think it’s funny? People who have been to India and have eaten the foods and are like, that was awesome.

What is the aim besides raising money for Essmart?

Sharing our love for Indian food! And it’s also funny. [The characters] do come with educational cards but honestly, you’re not going to buy something you haven’t already experienced yourself. If you’ve never eaten an idli, you probably don’t want an idli because you would think, “That’s weird. I’ve never heard of it.”

I’m actually curious to eat one! And I’ve never tried an idli.

Yeah! Now I look at the toys and wonder what an idli tastes like.

I should get you an idli. We should go back to that chutney place [we passed earlier] and get one.

But yeah, there could be potential in Indian restaurants. The big chains might want to buy some and sell them as souvenirs. We could see them in the tourist market in India. But I’m not quite sure who the customer might be.

I guess that’s what Kickstarter is. An experiment. Have you ever done one?

Never done one before. We’ve done an Indiegogo [campaign], but Kickstarter is, like, you need to hit a goal in order to actually get all the money and be funded. So, it’s interesting because now we’re trying really hard to push.

So how have you been getting the word out?

Fortunately, we have a network. One of the girls who is on the team – Avantika, the Stanford product designer -- has West Coast networks, which is great. Jackie and I have East Coast networks. But, we want to go viral and we’re not quite sure how to get to that. Also, we’re not sure if it’s a product that can go viral so, who knows!

So we’ve been tweeting, Facebook-ing, Instagram-ing, blogging, food touring, and going to Indian restaurants and food trucks to put up posters and talk to owners and have them promote our stuff as well. And then, I’ve been emailing a lot of food blogs, start-up blogs, and I even started looking at Asian American blogs because I’m Asian American.

Maybe you could find one of those YouTube stars. [See Part I for vague reference.]

[Gasp] Do you know any Indian American YouTube stars?

No, I know very few YouTube stars, if any at all. But that could be interesting.

A craving for something refreshingly sweet to offset the savory spurred us to search for bubble tea. As we perched in the open storefront window of Tea Do (132 N. 10 St.), I asked a few final questions – really, the last ones this time. 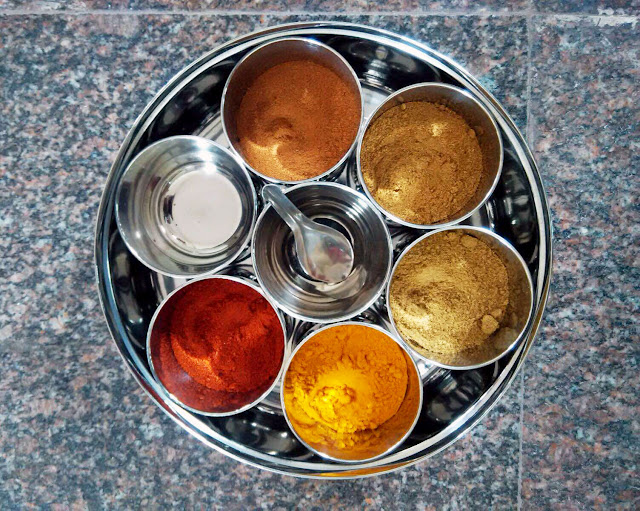 So tell me more about learning to cook Indian food, after 3 years* of living there.

Right! I only have recipes because I don’t know how else to do it. I have Indian friends who put spices together and do something with it, but for me … I have no idea what turmeric by itself tastes like or what coriander powder by itself tastes like or what a garam masala is. How do you adjust the spices and in what proportions and how much do you put and how powerful is a teaspoon of all of these things? I just don’t know. So far, I’ve been following recipes and measuring out spices.

Where have you mostly been getting your recipes from?

There’s a cookbook that Hannah, my husband Josh’s sister, bought for him -- and I just took it. He wasn’t going to use it anyways. It’s very UK based.

The other cookbook I brought back from the US was pretty appropriate for the cooking implements that I have in India. Like, I bought a mixie recently. A mixie is like a grinder or a blender. It has different attachments that do different things, and every household has one. So, I have one now!

I do a lot of curries in general because I like curries. Chicken curries, usually.

I like being saucy. I like sauces. I like rice. I still haven’t made a chapatti on my own yet, though. I’ve made chapattis at other people’s houses. They are little circle bread things made out of wheat flour, basically flour and water. You roll them out and put them on the [flat pan].

Yeah. You have to understand … Like as I was saying before, I didn’t grow up with Indian food. So I don’t know what flavor I’m actually aiming at, and I don’t know how to adjust the flavors, either. The dish I end up with isn’t authentic since I change parts of the recipes to make them better for my taste. Fortunately Josh, who is Indian, is not “pure.” He doesn’t really care as long as he can eat it. So I make my own type of food.

Tell me a little more about the spice box.

Oh, my spice box! I bought it at Metro, which is like the Costco of India. It’s like a Tupperware container but made of stainless steel, and inside there are seven bowls for spices and a little spoon. So far I put in turmeric, coriander, cumin, garam masala … I think I put in some fennel seeds. And cinnamon!

What I didn’t realize about spice boxes is the ease of cross contamination of my spices. I was telling you this earlier, but I make French toast pretty often and one day, I tried to use the cinnamon from my spice box. It ended up tasting like turmeric and other spices, like a masala French toast. French toast masala.

But that could be tasty!

Yeah… but not when you’re expecting something else. [laugh] So I realized if I wanted pure spice, I would have to take them directly from the packages they come in.

So, my spices! It’s really fun. And I think in Indian food you just mix spices anyways, so they only give you one spoon for everything.

Maybe it’s all about the mixing.

Yeah it’s all about the mix. The masala mix.

Is that what masala means?

Spices. Usually a mix of spices.

Interesting. So a tikka masala is…?

That’s what I’ve heard, too.

But it’s in India now. [in a singsong voice] Chicken tikka masala! Also in Minions.


* Note: Diana has actually been living in India for precisely 39 months.

To learn more or simply get your dose of cuteness and humor, head to the Happy Bellies Kickstarter page or their website.

“Creative Good” is a new series on creative ways to bring good to communities around the world. I love hearing about new initiatives, so if you have suggestions for a company, project, or person (or something else!) to profile, get in touch!
Posted by eLG @ 00:37