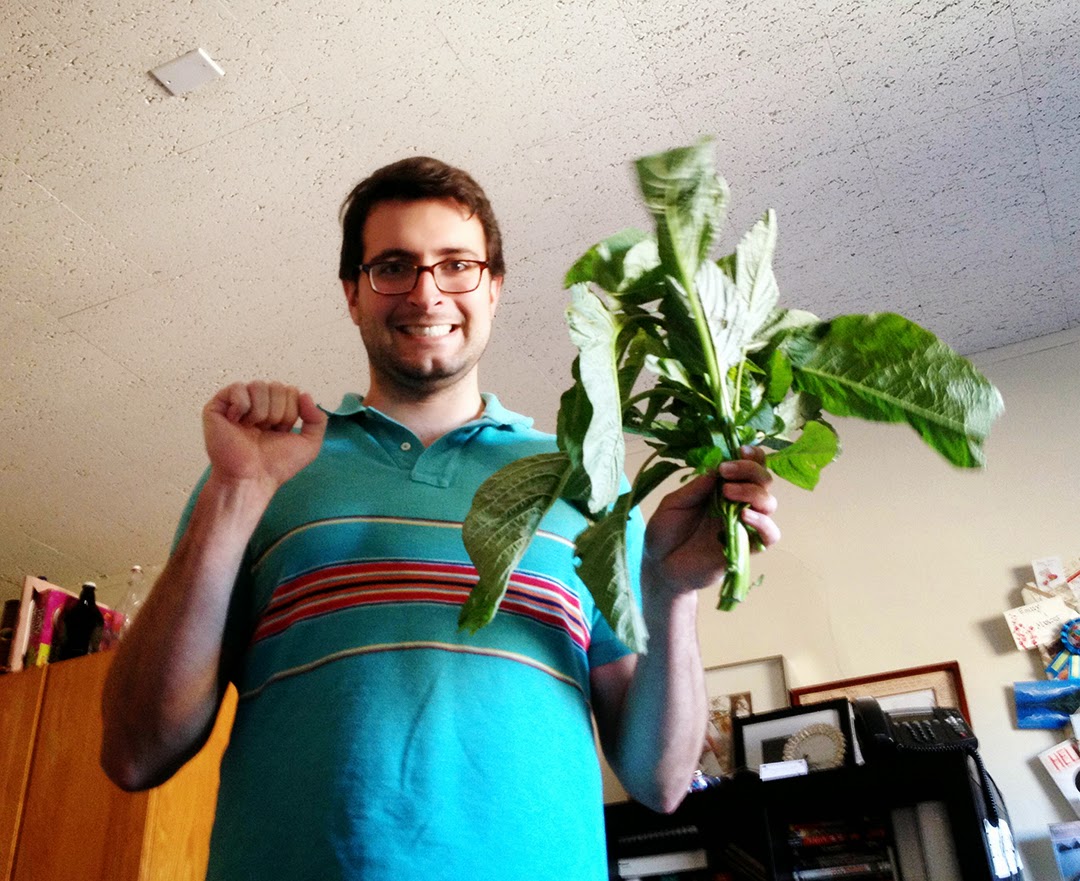 The Tall Man and I have been getting a box of produce delivered by Boston Organics for the last few months, in the hopes of boosting our veggie intake without the cost of extra Zipcar trips (thanks to car-less urban living).

So far, it's been great -- not just for convenience, but also for the quirky things that pop up in the box simply because they're in season.  Rutabega?  Kohlrabi?  I recognized them from the Food Network, but finally have the chance to tackle them in my own kitchen.  It's like getting a mystery box with a mix of familiar and unfamiliar edible goodness :)

When we opened last week's box, it was filled with a ... bush.  "What is this?!" the Tall Man asked, brandishing bundles of fronds in both hands, each bigger than his head.  The label said calaloo.  Cala-what?  Just the name made me want to try it out!  But first, I had him pose with one of our green treasures.  (Imagine him holding cheese and crackers, and you'll get it.)

When in doubt about a new ingredient, Google it.  Or look it up in a cookbook for odd vegetables.  We discovered that calaloo is a plant related to amaranth (whose seeds are used a wheat alternative) and is common in Caribbean and West African cooking.  Confusingly enough, it's also the name of a dish that uses this or other similar plants.  And really intriguingly, collard greens is the American adaptation of this African dish.  (This last fact really blew my mind.  ! )

While many traditional dishes feature calaloo sauteed or stewed with scotch bonnet peppers, we decided to cook a less spicy dish and adapted this recipe for calaloo pineapple couscous, making it gluten free with quinoa and more savory with the addition of chicken.

It was so good that I forgot to take a photo.  And how was the calaloo?  It tastes like a loose cross between spinach and watercress, and it has the same funny mouthfeel as spinach due to the oxalate in its leaves (fun fact provided by the husband chemist).

Neither of us measured while making the dish, so the recipe below is quite rough.  Use your own discretion, and let me know if you try it out.  To make it paleo, just remove the quinoa for an equally tasty soup.

* Thanks to the Tall Man for allowing me to post this photo.